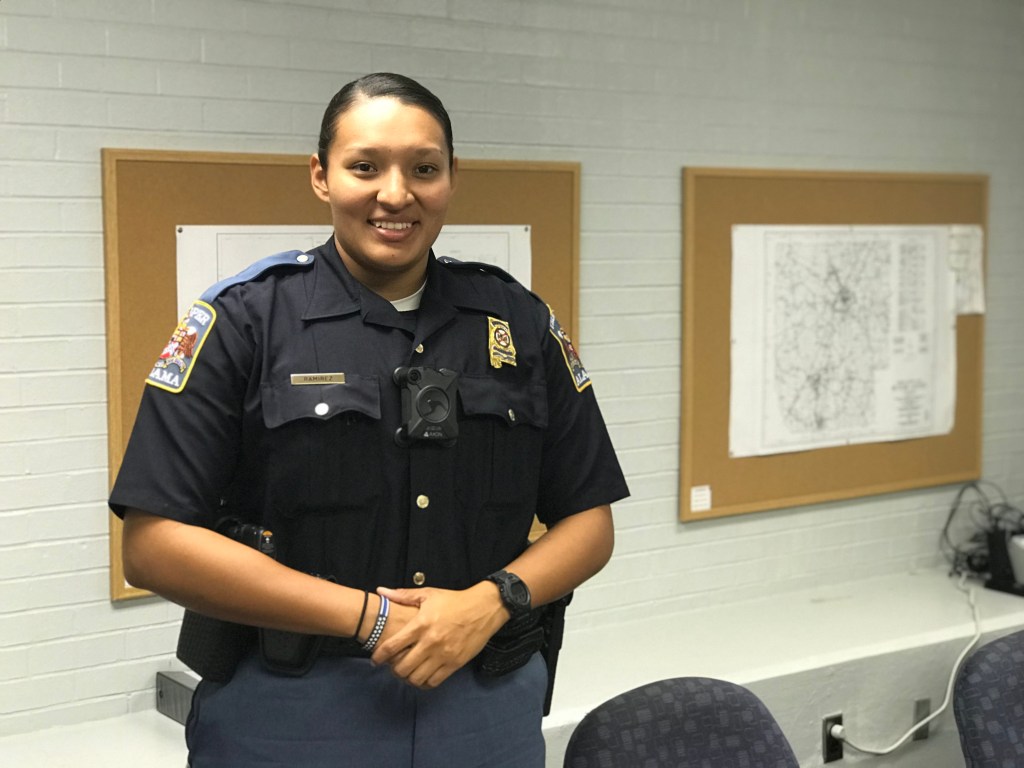 Caitlyn Ramirez has known what she wanted to do since she was just 12 years old after witnessing how working in law enforcement changed her dad’s life.

Now she has achieved that dream as one of the newest Troopers with the Alabama Law Enforcement Agency Highway Patrol Troop B Troy Post. She is just the fourth woman to join Troop B and the second in Troy.

Ramirez explained what drove her desire to join law enforcement at such a young age.

“When my dad was going through the CLEET Academy, I noticed a change in him for the better,” Ramirez said. “That’s what he wanted to do. He had worked on cars his whole life and he wanted to make a change in himself. He changed as a dad to me and as a husband for my mom. It was really good to see the change that he had.”

Just seven years later, he was gone – killed in the line of duty.

“He was responding to a domestic call and he was the first responder there,” Ramirez said. “He was outnumbered and my dad being a 6’6” guy, they ganged up on him and hit him in the head with a crow bar. He suffered a traumatic brain injury.”

Her father’s death in the line of duty only bolstered Ramirez’s desire to join law enforcement.

“That was just more motivation to me to continue to pursue law enforcement,” Ramirez said. “I knew I had to pick up where he left off.”

So after high school and two years at junior college in Texas, Ramirez joined the Troy University women’s basketball team and attained Bachelors and Masters degrees in criminal justice.

In her time with the Trojans, Ramirez scored an average of 10.5 points per game and 7.1 rebounds. during two Sun belt Conference Championship seasons. After graduating from Troy in 2017, Ramirez spent two years playing overseas in Spain and Israel before turning her focus back toward law enforcement.

“I knew once my basketball career was officially done with, it was time to pursue my longtime career,” Ramirez said.

Ramirez chose not to return to Oklahoma, but to Troy working as a Trooper in Pike County.

“I knew I got everything I could out of Oklahoma,” Ramirez said. “I saw the impact that Troy had on me in my three years at university and now working in Pike County, I want to keep it safe for those who supported me. I came back by choice – I wanted to work here and it’s a place I call home.”

Ramirez said being a woman in a male-dominated field has never fazed her.

“It starts way before me with two of our Troop chiefs that are at the top of high command,” Ramirez said. “They paved the way for me. Coming fresh out of the academy, I’m wanting to follow in their footsteps and help others that follow behind me to be Troopers as well. I know some might try to take advantage of (me being a woman), but I don’t look at it any differently. I wear this badge and try to do my job every day.”

Drew Brooks, Troy Post Commander, said the women in the Troop are as capable as any Trooper.

“I would put them against any male that wears the badge,” Brooks said. “They do their job and are very dependable. It’s a win-win for this county.”