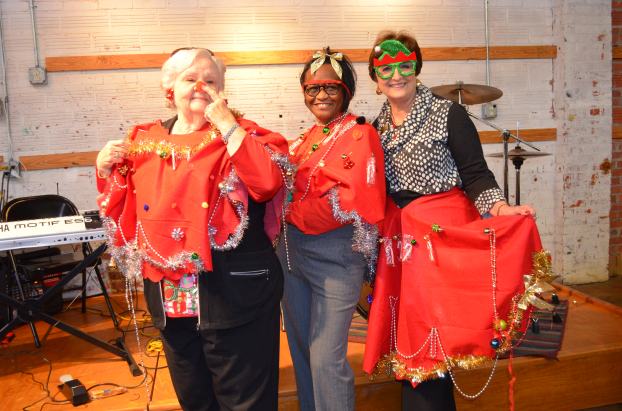 The Female Factor on Wednesday at The Studio was a fashion show to end all fashion shows.

Not only did the ladies model the latest Christmas fashions, they also created them from red Christmas tree skirts and an array of holiday garland, glitter and tiny, shiny Christmas balls and bells and bangles.

Racing against the clock, each table of ladies scurried to create a skirt or shawl from the tree decorations using stick pins and safety pins to adhere the decorative items to their tree skirt.

Each lady contributed to the creation so each fashion was a collective effort. Each table selected a model for their creation. The models, 12 of them, took center stage and sashayed, twisted and tuned in an effort to impress the judges, all males, so they could make wise and unbiased decisions. However, one model attempted to influence the judges with tiny gold and silver items that could not be identified at a distance. However, the judges’ decisions were final.

The winners were given the opportunity to take the skirts or shawls hone to enjoy during the holidays.

Sullivan has been a program guest at Female Factor and a goal of $1,000 had been set for the participants to be donated to Wounded Warriors. The ladies were congratulated for meeting and succeeding their goal.

Mark McDuffie and Josh Marvin attended with Sullivan, who expressed appreciation to the Female Factor participants for their support. They also joined him as judges for the fashion show. They were seen leaving Troy at a high rate of speed in a camouflaged van.

Caitlyn Ramirez has known what she wanted to do since she was just 12 years old after witnessing how working... read more