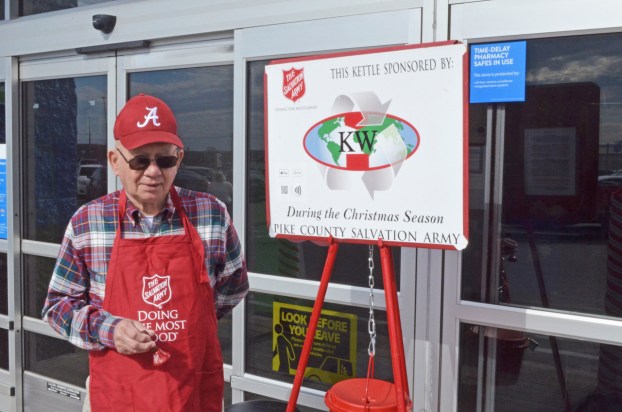 Salvation Army Bell Ringer Jimmy Phillips was cold. He had a coat to keep him warm.

His thoughts were of the many who, like him, are cold on dreary December days. But, unlike him, they had no coats to keep them warm.

“Care and concern. Those two things are why I ring the bell of the Salvation Army,” Phillips said. “I support the Salvation Army because of the good they do for the elderly and those in real need. Most all of those assisted by the Pike County Salvation Army are here in our community. They are our neighbors.”

He’s not exactly sure when he first rang the bell or when he became a dedicated bell ringer. But, he is sure the Red Kettle campaign helps change lives.

“The money that is raised provides food, lodging and clothes for those in need,” Phillips said. “The money also assists with rent, medications, gas and utilities for those who qualify. Those who apply for assistance must show proof of income. And, there are many people who truly need a helping hand.”

Phillips admitted that the two-hour time slots can, at times, become physically uncomfortable for the bell ringer.

“I carry a chair and I use it,” Phillips said, with a smile. “And, it can get cold and the wind can blow. But, I manage.”

In the 10-plus years that Phillips has been a Salvation Army bell ringer the largest donation he has received was $60.

“Most of the donations are one or two dollars and most of them come from women,” he said. “Women are the biggest givers.”

However, Phillips qualified that.

“That could be because I ring at the grocery entrance of Walmart,” he said. “That’s the door most women use to grocery shop. But most donations, men and women, are a dollar or two but it all adds up.”

“Their parents are teaching them to give and, hopefully, as young adults and adults they will continue to give.”

Phillips said he will man the Red Kettle eight times or more this Christmas. He said he rings the bell in the spirit of Christmas and that’s what Christmas is all about, “doing something for others.”

When it’s “chili” Christmas time, there’s no better way to spend an evening than with The Dill Pickers. The Brundidge... read more