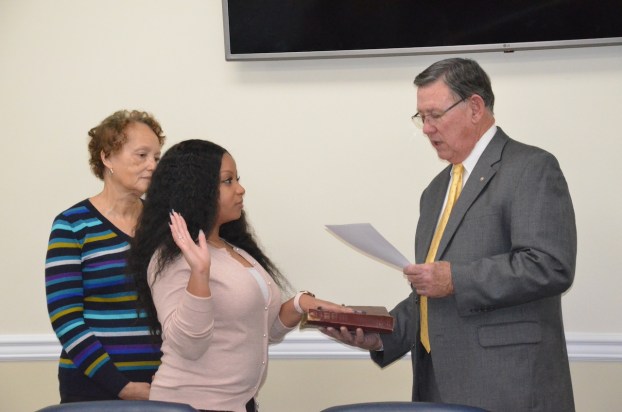 Michelle Griffin was sworn in as a member of the Brundidge City Council prior to the council’s regular meeting on Tuesday.

On November 26, Griffin was appointed by the council to fill the unexpired term of her father, Arthur Lee Griffin, who died suddenly on October 22. Griffin had served on the Brundidge City Council for 27 years. He was serving as mayor pro temper at the time of his death.

Griffin, who was joined by her mother, Carolyn Griffin, was sworn in by Brundidge Municipal Judge Don Dickert.

Griffin pledged to faithfully and honestly discharge the duties of council member to the best of her abilities.

Brundidge Mayor Isabell Boyd said the office of Council Member District 2 was not filled by wish but by loss.

Boyd said Arthur Griffin was a dedicated member of the council and his leadership will be missed.

“We know Michelle will serve with the same dedication as her dad,” Boyd said. “We welcome her to the council.”

Griffin, age 26, will be the youngest person to serve on the council. She is a lifetime resident of Brundidge and a Pike County High School graduate. She is employed as a teller at First National Bank Brundidge.

“I believe serving out my dad’s term is the right thing for me to do,” Griffin said. “This will be all new to me. It will be a learning process. I am looking forward to serving the people in District 2.”

A groundbreaking has officially been set for a new shopping center that will house Hobby Lobby and TJ Maxx. Developer... read more