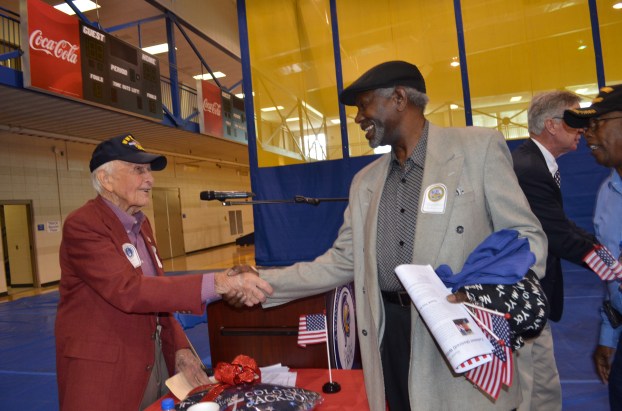 William “Billy” Jackson, Col. Ret. quickly got the attention of those in attendance at the 20th Annual Veterans Day Breakfast Monday at the Troy Sportsplex.

Jackson told the humorous story of his attempts to find a restroom on the first day of his service to his country. The word, “latrine,” was foreign to the young man from South Alabama.

Jackson, laughingly, said he didn’t know answering Uncle Sam’s call would require that he learn a foreign language. But, just as knowledge of the French word, latrine, served him well during his military career, so did “merci beaucoup” express his appreciation to the veterans who packed the Troy Sportsplex for the Veterans Day Breakfast hosted annually by the Colley Senior Complex.

As the keynote speaker for the Veterans Day Breakfast, Jackson said he was humbled, honored and worried about his ability to have the veterans leave thinking about their experiences defending America – experiences that have taken away so much of their lives.

Jackson said a ready example of the good that happens when people work together was the veterans’ breakfast.

“This type of cooperation helps us keep the United States of American free,” he said. “I really like the words, ‘keep America free.’ It took a lot of work, much blood and many sacrifices to make this great nation free and keep us free.”

Jackson said Veterans Day is a time to honor all veterans who unselfishly placed their lives on the line for America’s freedom.

“Those men and women were ordinary people until they heard the call of duty and answered it,” he said. “Just like you, our veterans, left their families, their homes and their lives not for recognition or fame or even the honor bestowed upon them and you. They fought to protect our country and to maintain our way of life.”

Jackson said the war on terrorism has made Americans realize how truly unique the American way of life is.

“The freedoms we enjoy are extremely special and that is why we must defend them,” he said. “But defense of freedom is not just for those in the military, each of us shares that duty and responsibility. We don’t have to join the Army or any branch of service to defend our way of life. We can protect our freedom simply by maintaining it here in America by voting and speaking out against injustices. We can ensure that everyone enjoys the benefits of freedom by volunteering in our communities and teaching our children what it really means to be an American.

Jackson told the gathering he was raised and loved by a WWI veteran.

“My father, PFC William Claud Jackson, was in the Wildcat Division in the Muse Argonne Forest on Armistice Day,” Jackson said. “He was proud of this rank PFC. He told me he was the only PFC in WWI. That’s what it means to be an American.”

A man was killed Sunday morning in a collision on U.S Highway 231. The wreck occurred at approximately 11:15 a.m.... read more