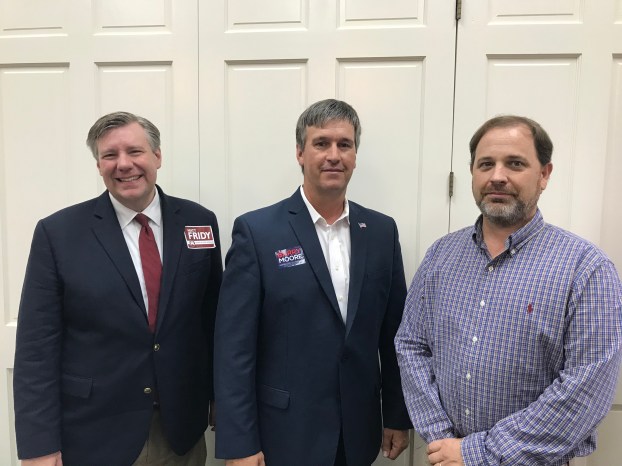 Moore, who formerly served in the Alabama House, is taking his second run at Alabama’s 2nd Congressional District seat formerly held by Martha Roby. Roby has announced that she will not be seeking reelection to a sixth term.

Moore finished third in the Republican primary in 2018 behind Roby and former Montgomery Mayor Bobby Bright.

Moore told the Republican club Wednesday that he bases his decision on four fundamental factors: faith, family, freedom and finance.

“That’s my litmus test,” Moore said. “Does it conflict with my Christian faith? How does this impact families in my district? Does it infringe upon basic freedoms? And is it fiscally responsible?”

A small business owner from Enterprise, Moore said he did not originally intend to enter the political arena, but had a change of heart after Barack Obama stated “we are no longer just a Christian nation” in a 2006 keynote address.

“I thought, if we don’t engage the culture, we have nobody to blame but us,” Moore said.

Moore told the group a story of a contentious vote he made early in his time in the Alabama House of Representatives against extending unemployment. His name was the only to come back red on the legislature’s voting board, and he said colleagues told him he had committed political suicide.

But the vote came back to bite Alabama, Moore said, as unemployment dollars were competing with jobs after Alabama enacted a strict immigration law that cut down the amount of illegal immigrants working in the state.

Moore was named the most dependable conservative voter in the Alabama legislature by Yellowhammer News.

Moore noted that he was the first elected official in America to support Donald Trump as a candidate for President, at a time where the Republican Party still had 17 candidates in the race.

Moore said he continues to defend Trump and more Republicans are needed in federal government to “help him fight.”

In addition to his small business background and his experience as a state legislator, Moore is a veteran of the U.S. Army National Guard and knows his way around a farm, which he said is important due to the agricultural and military interests of District 2.

Fridy is running for the Alabama Court of Civil Appeals Place 2.

Fridy currently serves District 73 in the Alabama House of Representatives, which he was elected to in 2014.

With experience as a staff attorney on the civil appeals court and other experience focused on civil appellate cases, Fridy is seeking to now serve as a judge on the court.

Fridy said he got his start in the pro-life movement, raised by parents who are pro-life advocates.

“I was involved in marches in Montgomery and Birmingham and I’ve stood out in front of clinics,” Fridy said. “I learned it’s not enough to sit back and be angry about what’s going on, you’ve got to get out and do something.”

As a representative, Fridy drafted an amendment to the state constitution declaring that Alabama is a pro-life state.

More than 60 percent of Alabamians voted to approve the amendment in 2018. The legislature followed by passing a bill criminalizing all abortions except in circumstances in which the mother’s life is in serious risk.

Friday also drafted a bill ensuring college campuses cannot deny speakers on a college campus on the basis of the content of that speech and ensuring that campuses allow free speech across the university and not just in certain “free speech zones.”

Because Fridy is seeking a judgeship, he cannot campaign on how he would rule, but he did promise the Republicans present of three things.

“One, I am a conservative,” Fridy said. “You can look at my track record, at my legislation and my work in the pro-life movement.

“Three, I will apply the plain meaning of the language in question. Some judges love to take the words and twist the meaning to reach a certain result. That’s not right. If you don’t know what a word means, you should look it up in the dictionary.”v