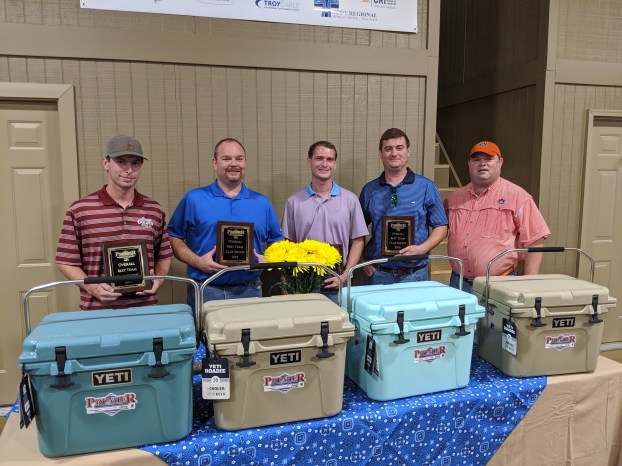 The event also included a steak and shrimp dinner prepared by Yanni Tempelis of Francesca’s and the Pig Cafe and a silent auction to raise even more funds for the medical foundation.

The fundraiser is part of the dealership’s campaign to raise more than $100,000 for the Pike Medical Foundation, which supports Troy Regional Medical Center.

“It’s a good cause,” Gregory said. “This is something that affects everybody; whether the money goes to the cancer center or the hospital needs it for something else. Troy Regional Medical Center is a big part of our community and we want to make sure our community has the best hospital possible.”

The dealership is still tabulating how much the event raised. The dealership also committed $200 per vehicle sold during the quarter, which ends Thursday.

The dealership is hoping to raise $100,000 between the weekend event and the vehicle sales combined.

The new cancer center that opened in December 2018, with the help of a $100,000 contribution by the Pike Medical Foundation, now sees approximately 130 patients a month and offers chemotherapy, iron and adjunct therapies all here in Troy.

‘Cradle to Career’ round two to focus on actions, outcomes of local education

The second round of the “Cradle to Career” forum on education in the Troy community has ben set for 5:30... read more