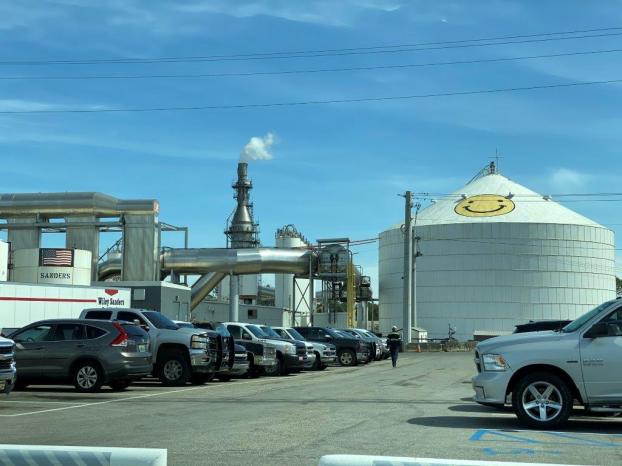 “It’s no different than a tea kettle on a hot stove.”

Several local residents began to notice the large steam plume flowing from the tall vertical stack located off Henderson highway over the weekend.

According to Campbell, the plant began its steam-generating process more than a week ago.

“It wasn’t a change in operations, but rather a change in weather that attracted attention over the weekend,” Campbell said. “What we are seeing is pure, clean steam. Although the velocity seems to vary from day-to-day, our process is constant. The variance is the change in humidity.

“On higher humidity days, it takes longer for steam to dissipate which provides a taller plume. When we saw a large change in atmospheric conditions, we saw the larger plumes of steam.”

So, what, exactly, is the Sanders Company cooking to create such a big batch of steam?

According to company officials, the equipment is known as a SO2 Scrubber which essentially “scrubs” the sulfur dioxide from furnace exhaust. The technical process is known as flue-gas desulfurization (FGD) and almost completely eliminates any SO2 emissions from Sanders Lead’s filtered furnace exhaust.

The scrubber project was initiated in 2016 in order to comply with the National Ambient Air Quality Standards, a regulatory program under the Clean Air Act. These new federal regulations reduced the allowable limits of sulfur dioxide emissions effective December 31, 2019.

“Sanders has constantly remained in compliance with the federal SO2 regulations. In fact, with this particular design, we are significantly lowering the emissions below and beyond the regulations,” Campbell said.

The goal, he said, was to exceed the federal requirements. Sanders found a design that not only provided an environmental solution, but also a valuable byproduct that allows for a zero-discharge process and eliminated any need for treatment or discharge permits.

“This particular design uses waste heat from the furnaces to evaporate the water used to scrub the gases,” Campbell said. “The ammonium sulfate crystalizes and yields a dry, granular product, which is a very high grade and sought-after fertilizer.

“The process generates 120 tons of fertilizer daily. All which has been presold under a long-term contract that will ship in bulk through a wholesale distributor.”

In addition to eliminating discharge requirements and producing the fertilizer, officials say there is an added advantage of a significantly quietened operation by eliminating several large and noisy fans.

Campbell said the environmental benefit of the scrubber project comes with a price tag over $62 million. During the past seven years, Sanders has invested over $100 million in additional environmental controls.

Although the addition of the scrubber has created over 25 additional jobs to date, Campbell insists that this project has no economic pay back.

“This isn’t an expansion project. This is a protection project,” he said. “We are protecting jobs and our community in environmental and economic ways. That’s what I hope people will remember on a cloudy day when they see those large plumes in the sky. This is a good thing, for all of us.”

A property planned to be the site of the Conecuh Ridge Distillery has been rezoned to the Tourism Development District,... read more