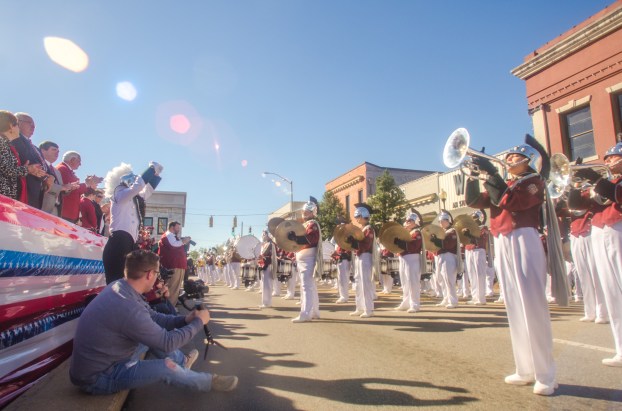 The annual Troy University Homecoming and Appreciation Day Parade will once again march through the streets of Downtown Troy, reversing a decision to move the parade to the Troy campus.

“Since making last week’s announcement to relocate the parade, we have talked with local citizens, city officials, and university personnel and we recognize that changing the parade route was not the right decision at this time,” said Dana Sanders, president of the Pike County Chamber of Commerce. “While our attempt to relocate the parade was an effort to address logistical issues, the proposed parade route is not without its own logistical challenges, as well.”

The Chamber had announced the relocation of the parade to the Troy University campus last Friday, and some residents have been critical of the change, citing concerns about parking and transportation to the campus among other issues.
Sanders and Parade Chairman Dan Smith said last week that bringing the homecoming parade to campus has been discussed for several years, and expressed excitement at the potential of having the parade brought closer to the game day atmosphere.

“Although our sincere intent was to bring the Pike County community and Troy University together on campus to enjoy the beautiful and exciting Homecoming Day atmosphere, we now realize the best course of action is to return the Troy University Homecoming and Appreciation Day Parade to its original route through Historic Downtown Troy,” Sanders said. “We sincerely apologize for any confusion or concern that our previous announcement may have caused. We look forward to gathering as Troy Trojans at 10 a.m. on Saturday, November 9, in Downtown Troy as we unite to show our appreciation for our university and its impact on our community. We hope you will come out, support the parade, and help us carry on this decades-long tradition.”

Lineup begins at 8 a.m. and all vehicle entries must be in place by 8:30 a.m. Walking units must be in place by 9:30 a.m. Parade entry forms are available at pikecoc.com and must be submitted to the Chamber office no later than October 25. Entry is $10 and is open to community and university groups, organizations and anyone who wants to support the Trojans.

All entries must have parade theme or Troy University signage on unit. Floats must be no higher than 12 feet, no longer than 18 feet, and no wider than 9 feet. No horses are allowed, no items may be thrown or handed out from floats, no profanity or vulgar music may be played, no racing or high-speed performances are allowed and no riding on the bumpers or tops of vehicles.

For anyone interested in having a parade entry, please contact the Chamber at (334) 566-2294, via email at info@pikecoc.com, or visit pikecoc.com.

Premier Chrysler Dodge Jeep Ram is hosting two events on Saturday, October 26, in hopes of bringing in $100,000 for... read more