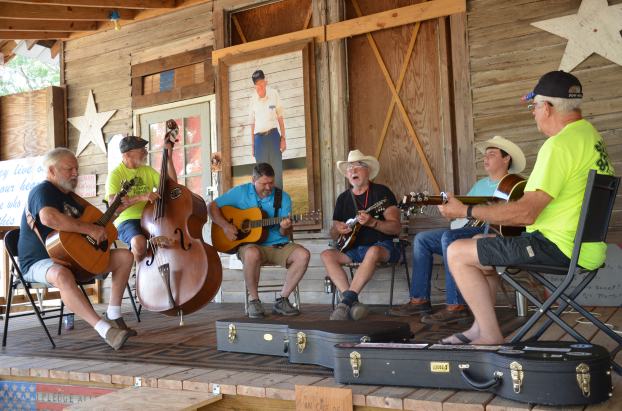 That inscription on a marker at the Henderson Bluegrass Park explains why each October folks come from far and near to a sleepy hamlet tucked away in rural Pike County, to play bluegrass and pay homage to Ol’ Rex.

And, so it is again. The Henderson Bluegrass Festival is underway at the Henderson Music Park in Henderson. The music will be played until late tonight and will, literally, “pick” back up when the sun comes up Saturday and not stop until the clock strikes midnight.

Admission is free but a donation to the continuation of bluegrass music at ol’ Rex’s park in Henderson, Alabama will be greatly appreciated.

For more than 50 years, Rex Locklar was an instigator and promoter of bluegrass music. Folks joked that even the grass on Locklar’s lawn was bluegrass.

For many years, the old Henderson schoolhouse was one of the premiere bluegrass “convention centers” and a gathering place for thousands upon thousands of bluegrass and traditional music lovers from Minnesota to Florida and from Virginia to Texas. And, at the center of it all was Ol’ Rex.

Without Ol’ Rex the bluegrass music would stop, many people thought.

But Shelby Cargile, Bobby Jackson and the late Pete Austin, were determined that Rex Locklar’s legacy would continue and bluegrass music would still be played.

“Rex’s brother, Wiley Locklar, was with us in our efforts to keep Rex’s dream alive,” Cargile said. “He gave us permission to continue to host bluegrass festivals on his property and to keep the bluegrass growing. Without his support, the Henderson Bluegrass Festival would be a thing of the past.”

But, thanks to the generosity of one man and the hard work and dedication of three others the music goes on.

“It’s all for the love of ol’ Rex,” said Jackson of Andalusia. “We want to carry on his legacy. We are his family and we are a big family. We have this festival two times a year. In October and April. Coming to the Henderson Bluegrass Festival is like having a family reunion twice a year.”

Bluegrass music lovers started coming in to the Henderson Bluegrass Park on Tuesday and by tonight the park will be packed with RVs and pickers and grinners. And the high lonesome sound of bluegrass can be heard for miles around.

Some of the pickers are “newcomers” like Floridians, Richard Holmes and Denny Longworth, who have only been coming for four to five years. Longworth said he first came because somebody took his guitar and he came after it. Holmes said he just loves music and being around good people.

Then, there are those like Mark Carter, an 18-year veteran, who just can’t imagine not being at the Henderson Park to bask in the bonds of friendship that are the hallmark of bluegrass music.

Carter said everyone is invited to the Henderson Music Park this weekend and play along, sing along or just sit back and listen to the music. “There’s nothing like bluegrass,” he said.

The Pike Liberal Arts Patriots return home with a little bit of momentum to take on rival Fort Dale for... read more