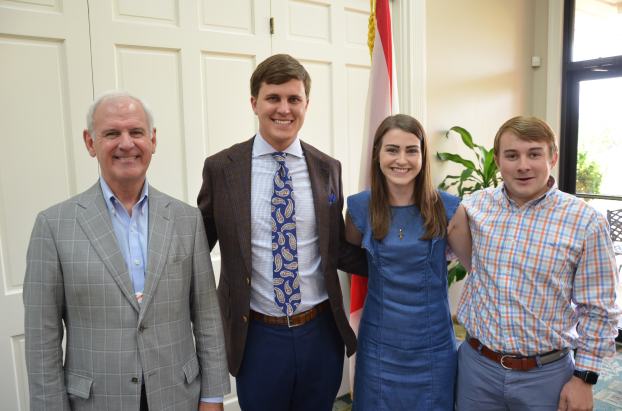 U.S. Rep. Bradley Byrne and State Rep. Will Dismukes visited the monthly meeting of the Pike County Republican Women Thursday to discuss their platforms for the 2020 election.

Byrne rallied the members to support President Donald Trump as he undergoes an impeachment inquiry by House Democrats based on Trump’s call to Ukraine seeking dirt on Joe Biden.

“You’re either with President Trump or you’re not,” Byrne said. “Those of us in federal office, or who want to be in federal office, need to stand up for Trump. We don’t need Republicans to be critical of him; we need to fight for him and stand for him. Democrats don’t think they can beat him so they’re using a phony impeachment inquiry to try to get him out.”

Byrne said the House Democrats have defied the tradition of Congress in moving forward with the impeachment inquiry by foregoing a resolution that would require a majority to move forward with the process. Although the resolution is not required by the Constitution, Byrne questioned why Democrats would break with House tradition.

“The Department of Justice reviewed all of this in August and found no evidence of a federal crime and closed their case,” Byrne said. “What the heck is the House doing if the head of our nation’s criminal division said there’s no federal crimes? … The national news media won’t tell you that. They’re against us. But we have to stand up when it’s tough.”

Byrne said the impeachment inquiry is a symptom of a larger fight. “This is a struggle over the values of the United States,” Byrne said.

Byrne said some Democrats do not believe in God, and that the Democratic party has sought to make government the center of people’s lives instead of God.

“My faith is important to me,” Byrne said. “It’s the center of who I am. That’s true of most if not all Republicans in Washington.”

He criticized Sen. Doug Jones, the incumbent in the 2020 race, for voting against a bill that would have limited abortions to 20 weeks and for not standing for Alabama values.

Byrne also hailed the importance of building the border wall and continuing to fund military defense as America faces the worst “threats since World War II.” He said ensuring Fort Rucker is an integral part of that plan is critical.

Dismukes is running for the seat of Alabama’s 2nd Congressional District after incumbent Rep. Martha Roby announced she will not be running for reelection.

Dismukes shared his experience as pastor, farmer, small business owner and state representative. He also stressed the importance of the military.

Dismukes said his age can help “bridge the gap” and “protect a new generation” from certain liberal policies.

“We’re going to lose a whole generation of kids if we don’t send somebody to Washington that’s able to speak to them,” Dismukes said. “Someone needs to tell them it’s OK to be conservative.”

He also shared about his cosponsorship of the state’s anti-abortion law, one of the strongest in the country, and his sponsorship of “Jenny’s law” that was passed, terminating parental right of convicted rapists immediately.

An ordinance that would establish an entertainment district in Downtown Troy is no longer on the council’s next agenda as... read more