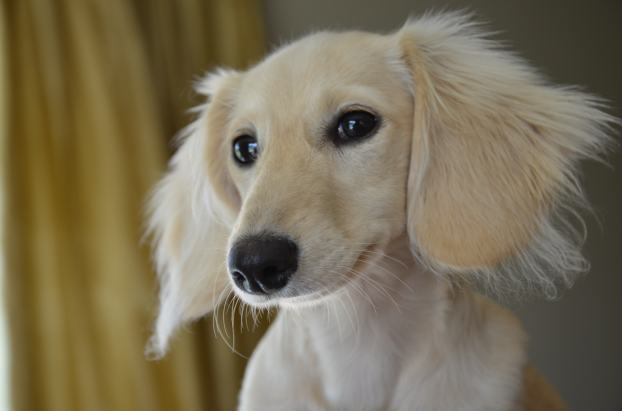 When the voting in the Humane Society of Pike County’s 2020 Pet Photo Contest ended at 5 p.m. Sunday, September 1, Bailey Brown, the dainty dachshund of Bobby and Charla Brown was the runaway winner with 2,554 votes. But the contest for the honor of being the cover pet on the 2020 Pet Photo Calendar was close until the last minute when the Bailey bunch, family and friends, came through with a huge donation that put Bailey on the cover.

“The contest was fun and we’re excited that Bailey will be featured on the calendar,” Charla Brown said. “But the best thing, the most important thing, about the humane society’s Pet Photo Contest is that the money raised with help reduce the number of unwanted dogs and cats here in Pike County. It’s so sad to see animals that have been neglected and abused. Reducing that number is what the contest is really about.”
Brown expressed appreciation to those who voted for and worked for Bailey.

“We all had a good time working for such a good cause,” she said. “We thank everyone who voted for Bailey and everyone who voted. We especially thank the members of the Humane Society of Pike County for giving us this opportunity to help raise money in support of their efforts.”

Bailey seems totally unaware that she now holds a prestigious title among animals. She’s much more interested in tussling with a stuffed animal and running and chasing a bouncing ball around the house. The little “dash” hound has more energy that the pink bunny on TV.

“We’ve had a dachshund before and once a dachshund always….” Brown said smiling as she tossed a ball to Bailey. “She has a lot of energy and she keeps me busy.”

Brown said she and her husband could have opted for a larger dog that would enjoy the outdoor life of a country dog.

“But we live in town and decided on a ‘town’ dog,” Brown said.
Bailey, the dainty dachshund, is certainly a ‘town’ dog or perhaps even a “city” dog. She lounges on her pink pillow and seems perfectly content to enjoy indoor comforts.

As Brown lovingly stroked Bailey, she acknowledged there are far too many dogs and cats that don’t have homes and someone who cares for and loves them.

Through the HSPC’s annual spay/neuter program, that number is reduced.

“The money raised with the photo contests goes to that program. We are proud to be a part of something that does so much good,” Brown said. “But, still too many animals have no homes.”

And that’s where the Pike Animal Shelters steps in to find forever homes for these unloved animals.

Donna Brockmann, HSPC president, expressed appreciation to the Browns for their support of the 2020 Pet Photo Contest and to all those who entered their pets and all who cast votes.

“We look forward to seeing all of these precious animals on the 2020 Pet Photo Calendar,” Brockmann said. “Each and every one of them is a winner and we love them all.”

The calendars will be available initially at the Peanut Butter Festival in Brundidge on Saturday, October 26. After that, from members of the HSPC and at locations around the county.

Pike County is expected to collect twice as much revenue in the current fiscal year as it did last year.... read more