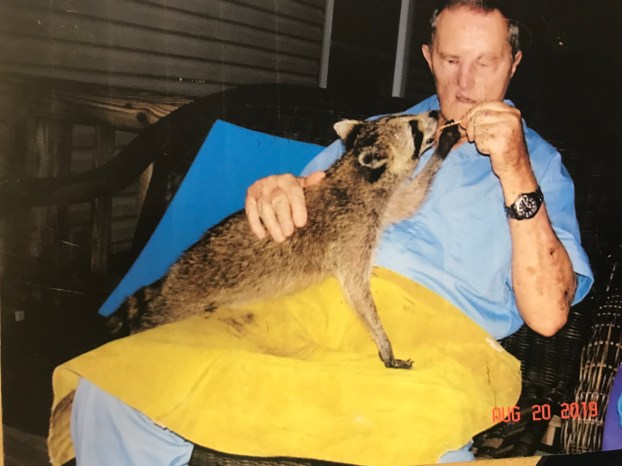 And, not just because he grew up in rural Pike County with cornbread in his paper sack lunch or a pone in his pocket and not because cornbread and cotton could “sucker” a fish. Windley Wade Tatom knows the power of Southern cornbread because of the unlikely friendship it fostered.

It all started when Tatom was comfortably soaking in the sinking summer sun on the back porch in his wicker chair.

“I noticed movement in the brush and thought it was an armadillo nudging around for food,” Tatom said. “I kept watching to see what it would do. But I soon saw it wasn’t an  armadillo; it was a raccoon, so I sat perfectly still. The raccoon saw me and, for a while, we just watched each other. Then, he went back and in the brush.”

Tatom didn’t move any of the time.  He just sat with his eyes on the raccoon. Each day, the raccoon would inch just a little closer toward him.

“I didn’t make any moves toward him and he kept coming a little closer each day,” Tatom said. “After about two months, the raccoon slowly made his way to the bottom porch step. Then, the next step, and the next, until he made his way onto the porch. Then, Tatom’s patience really paid off because not even a raccoon could resist the temptation of Southern cornbread.

“Cornbread is powerful temptation,” Tatom said. “I’d pinched off a piece of cornbread and put it on a toothpick. At first, he just looked at it; then he took it and ran.”

After that day, the raccoon was hooked on cornbread, fried Southern style. Each bite took him closer and closer to Tatom. Knowing the high-content of grease that flavors fried cornbread, Tatom decided to sweeten the pot for his furry friend,

“I decided to see how he would like Fig Newtons and he liked them, too, but not as much as cornbread,” Tatom said.

With cornbread and Fig Newtons as bait, Tatom coaxed his raccoon buddy closer and closer to him. The raccoon ventured onto the wicker chair and soon was nuzzling next to Tatom.

“When he started putting his paw on my lap, I knew I had a friend,” Tatom said.

With their friendship came a concern. Tatom knew too much grease and too many sweets were not good for his raccoon.

“Cornbread needed a balanced diet,” Tatom said, with a smile. “So, I started feeding him a balanced diet of wieners, cat food, cornbread and Fig Newtons. By this time, Cornbread was letting me stroke him like a cat would and even rub his belly.”

Their friendship was cemented with cornbread.

Cornbread visits his friend, Windley Wade Tatom, every day between 6:30 and 7:30 p.m. They have a rather unique friendship, the man and the little “beast.” Cornbread has not lost his wild instincts and Tatom doesn’t want that to happen. Cornbread must know how to survive in the wild.

Tatom looks forward to the afternoon visits from his little friend but he knows that one day, Cornbread will be “Gone! Gone! Back to the woods.”

But when that does happen, Tatom will relish what he has learned from their unique friendship.

A Trussville man will face trial beginning Monday on charges of kidnapping and robbing a man in Troy in February... read more