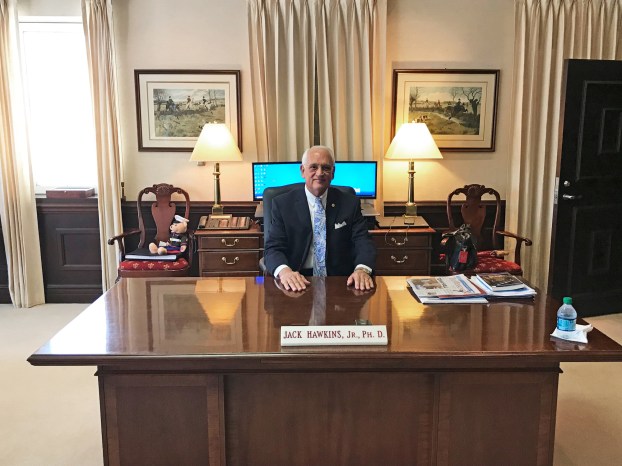 LEAVING A LEGACY: Hawkins reflects on 30 years as Troy chancellor

On Sept. 1, 1989, Dr. Jack Hawkins Jr. stepped into the role of chancellor at Troy Sate University, following the footsteps of the legendary Dr. Ralph Adams.

Now 30 years later, Hawkins is the longest-serving chancellor currently serving at a public university in the U.S.

Much has changed at the university over those 30 years, including the changing of the name to Troy University, as it is known today.

From the moment Hawkins Jr. walked onto campus, those who met him knew the university they loved was in good hands.

“He was an impressive young man,” said Dr. Fred Davis, who was serving as Troy’s associate provost at the time of Hawkins’ inauguration. “I didn’t know a lot about his background, and it really didn’t matter, but I found him to be quite impressive. He looked presidential and he had a vision.”

Hawkins’ experience serving as president of the Alabama Institute for the Deaf and Blind gave him experience in leadership as well as a familiarity with the university.

“I believed that my wife, Janice, and I could make a difference here,” Hawkins added. “And she has been a remarkable partner on this journey, championing initiatives as varied as the appearance of the campus, advocating on behalf of military veterans and creating study abroad opportunities. And there has been no better champion for the fine arts.”

The beauty of the campus is one of the university’s characteristics that made Hawkins fall in love with Troy, and he has put his own mark on the campus aesthetic as well.

“I knew of the University, but I was not prepared for the simple beauty of the campus, the fine old buildings such as Bibb Graves Hall and the magnolias on the Shackelford Quad,” Hawkins said. “Most impressive was the newly constructed Sorrell Chapel. In fact, I was so inspired that we used the Sorrell Chapel as the model to construct the Chapel at AIDB, which opened in 1985.

“Since 1989, we’ve kept everything consistent in design, with the cupolas and the brick. We know that if we can get a student on campus, we can bring them here. If we look the part, we know the academic programs are quality. We are satisfied we have just that.”

Hawkins said the major change in higher education since he became chancellor has been the advancements in technology.

“When I began my career in higher education, the technology was a manual typewriter,” Hawkins said with a laugh. “Today, communications are instant; there’s an opportunity to deliver academic programs at a distance. Now 70 percent of the population has access to a smart phone. One dimension that has really capture our imagination has been the shift in populations from campus to home – we’re serving about half the number that used to come to campus in a different way. The university of the future will neither be totally high tech or high touch; we’re still in the people business and we can never forget that. The most important thing we do is to serve our students.”

Dr. Don Jeffrey, the current senior vice chancellor of the Dothan campus, worked as an aquatics instructor for Adams from 1977 to 1989, when Hawkins became Chancellor. Since then, he’s had 14 different titles with the University and has forged a personal bond with Hawkins.

“When I met him, I was impressed, because he’d look you directly in your eyes,” Jeffrey said. “You knew that he had a vision and the work ethic to bring it to reality. I knew from the very first day I met him that he would be a champion for our students, and that’s what he’s been for three decades and counting.”

Despite the optimism, few could have predicted Hawkins’ tenure would outlast his predecessor’s or have such an impact on the University during the course of 30-plus years.

Under his leadership, Troy became an innovator in the realm of online education beginning in the 1990s, forging an internationally respected presence on the World Wide Web.

Hawkins also served as the catalyst for the University’s evolution into an international institution, as Troy has attracted record numbers of students from other nations and established teaching sites around the world, alongside international partnerships in countries such as Italy and China.

“If pressed to name one initiative of which I am most proud, it would have to be the internationalization of our University,” he said. “Over the last 30 years we have gone from enrolling 40 students from 13 nations outside the U.S. to enrolling students from 80 nations speaking 85 languages. Further, this past year we sent more than 50 study-abroad delegations to 34 countries. We have enjoyed success in places like Vietnam, where we became the first U.S. university to award the baccalaureate degree. We have become Alabama’s International University, even though the odds were stacked against us.”

In the early 2000s, Hawkins spearheaded the University’s move to NCAA Division I-A athletics as well as the unification of the former Troy State University System into the modern Troy University.

“I seldom get asked about our English department when I travel,” Hawkins said. “If I did, I’d tell them how good it is. But what I’m asked is what is the football team looking like this year, or about the basketball team. Elevating to the highest tier of Division I athletics has served us well – the dollars we spend are no longer a cost, but an investment.”

Hawkins said higher education is in a challenging time, as it is crucial to provide students a path to employment.

“We’re more focused on the employability of our graduates than ever before,” Hawkins said. “Every student needs an opportunity for an internship and to study abroad. It’s really important tat our graduates understand the world of work.”

For the students Hawkins championed throughout the years who have gone on to success after college, he remains a source of inspiration, and his influence has spread beyond Troy’s campuses and teaching sites into the surrounding communities.

“I’m overwhelmed with gratitude for everything he’s done for the University,” said alum Jeff Coleman, CEO of Coleman World Group, who graduated from the Dothan Campus in 1995 and was named Alumni of the Year in 2003. “Everything he puts his hand on is first class, from the buildings he’s built to the people he’s reached. The biggest thing is just the students he’s touched that have gone out in the world with that Trojan warrior spirit. That has made a difference in thousands and thousands of lives – great leaders making a difference in their communities.”

For Hawkins, those lives define his legacy more than any of his other accomplishments.

“I believe the only meaningful legacy for any university president or chancellor is the success of our alumni, which is the best barometer of success for any university,” he said. “The great thing about a career in higher education—no matter what your position— is your work can have a ripple effect that spans generations. We don’t make widgets, we educate students, and in the process, we shape value systems. We can help our students achieve great things in their chosen fields, be good citizens, and be leaders in their communities. That’s a legacy everyone who works at Troy can embrace.”

After dropping their first game of the season a week ago, the Patriots hope to get back on track this... read more