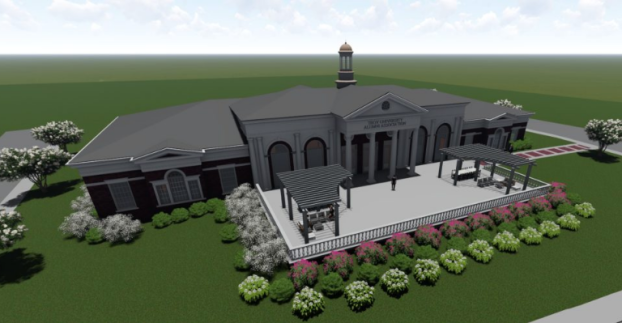 For now, a new alumni center at Troy University is still just a dream – but the beginning of fundraising efforts is one step closer toward bringing the center into reality.

The first three gifts in support of the campaign have been made by Troy Alumni Association Board members Bill Hopper, Lloyd Taylor and Carolyn Gibson.

“These gifts will help launch the fundraising for this much-needed facility and motivate other alumni to give as well,” said Faith Ward, director of alumni affairs. “We are truly grateful to our Board members for setting an example with their generous gifts. Our alumni deserve a world-class facility on campus that will be a home away from home while they are here. Thanks to these gifts and to others who are contributing, we are closer than ever to making this dream a reality.”

Following the announcement of these first three gifts, Ward said two chapters, Pike County and Emerald Coast, have also contributed to the campaign and others are making plans to follow.

Troy’s current Alumni House on Highland Avenue has been in use since 2004.

“Even though a countless number of events have been held at the current location and it has served our alumni well, the Alumni Association needs a larger space on par with those found at peer institutions,” said Bill Hopper, alumni board president.

In more than 25 years as an employee of Sodexo and Marriott , Hopper traveled to some 1500 different colleges and universities and noted that the vast majority had alumni facilities much nicer than Troy’s current facility.

“If we are going to serve our alumni and acknowledge their importance, we need a new, up-to date alumni center,” Hopper said.

Hopper said a modern alumni center can motivate graduates to reconnect and provide greater support for their alma mater.

“Our alumni can help support the university by fundraising and helping recruit new students, and I think it is important that we have a gathering place for alumni that looks as impressive as the other construction that has happened on campus in recent years,” Hopper said.

Ward said Troy’s vision is for a modern alumni center with updated technology and space for meetings and large events.

“We want to have space where we can comfortably host reunions, large meetings and other gatherings for our alumni,” Ward said.

Board member Lloyd Taylor, a 1968 graduate, said an updated alumni center will help the university make a strong impression on alumni revisiting the campus.

“I didn’t go back to the campus for years and years,” Taylor said. “But when I did, I found one of the most beautiful campuses in Alabama. We need an alumni center that makes as strong a first impression as the rest of the campus.”

Dr. Jack Hawkins Jr., chancellor, said the start of fundraising is encouraging and that he is willing to give up to $1 million personally to support the facility’s construction – but initial estimates for the facility project costs of $4 million or more.

“The majority of this funding will have to come from private donations, the alumni base largely,” Hawkins said. “I trust the Alumni Association will be committed to doing its part. The grand vision is to eventually have an alumni center large enough to include space that will better allow alumni to be engaged with the university. But we’re a long way from being able to break ground unless there are a few real generous supporters out there; patience is the key. We assume this will be a long-term project.”

Hawkins described his dream to see not just an alumni center, but a conference center complete with lodging to house alumni and generate revenue to operate the facility. The ideal location would be the current National Guard Armory, should the facility ever be discontinued as an armory. Hawkins said.

Although a preliminary design has been rendered, Hawkins said that there is still much work to do and many refinements and changes may be made in that time.

Troy City Schools director of technology Eujon Anderson is one of just 40 U.S. applicants to be named a “Google... read more