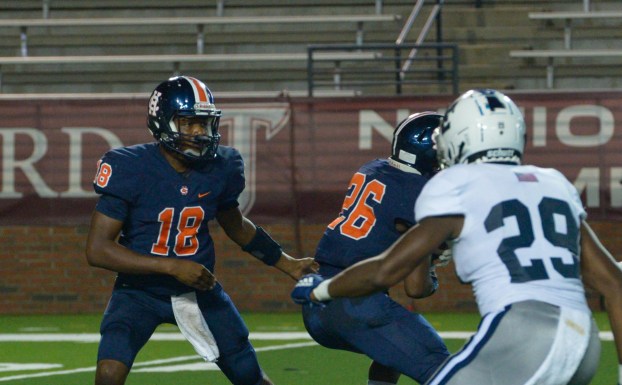 Photo/Jessica Gunn Pooka Jones hands the ball off to his running back against Enterprise on Friday night in Troy.

What started out as a close contest got away from Charles Henderson High School Friday night, as the Class 7A Enterprise Wildcats pulled away in the second half for a 50-22 win over the Trojans in Troy’s Veterans Memorial Stadium.

Tied 0-0 at the end of the first quarter, Enterprise led 22-6 at halftime and 29-14 after the third quarter before scoring 21 fourth-quarter points.

“Against a team like this, it will get away from you in a hurry,” said CHHS Head Coach Brad McCoy. “I thought we had a good week of practice, and our expectations were a lot more than that. I’m a little disappointed in the mistakes and unforced errors we should not have made, and that is bothersome. But the heart and effort and fight, there was no doubt about it, it was there. We just had a lot of mental mistakes on both sides of the ball that caused some big plays to go against us. At times I thought we looked very sharp, but we were just not consistent. You have got to be that way to beat a 7A team like Enterprise.”

Both teams had two possessions each without scoring in the first quarter before Enterprise took the ball at the CHHS 48 and four plays later freshman running back Mykel Johnson went 10 yards for the touchdown, Joshua McCray went in for the two-point conversion and Enterprise led 8-0 with 11:12 remaining in the second quarter.

CHHS cut the lead to 8-6 on their next series, as senior quarterback Pooka Jones found Javen Hill open for a 2-yard TD pass play.

The Wildcats responded with a TD pass from quarterback Jackson Darlington to Terrell Hudson, Hunter Perry added the extra point, and it was 15-6 with 5:49 showing in the first half.

Darlington connected with McCray for a 17-yard touchdown pass with 3:25 to go, Perry kicked, and the Wildcats led 22-6 at halftime.

The Trojans got the kickoff to open the second half and went 67 yards in four plays, as Jones hit Hill for a 27 yard gain and Jay Taylor for a 24-yard reception before Jonathan Carter ran it in from 17 yards out for the touchdown. Jones then completed a two-point conversion to Elijah Caldwell and the score was 22-14 with 11:07 to go in the third quarter.

McCray took it in for Enterprise for a 4-yard score and Perry kicked to go-ahead 29-14, which was the score after three quarters.

CHHS responded with a five-play touchdown drive, with Jones hitting Hill for an 11-yard scoring play, and Jones then found Caldwell open for the two-point conversion cutting the lead to 43-22.

Enterprise took the next kickoff and Cam Ron Cowart scored on a 1-yard carry, the kick was good, and the Wildcats were up 50-22 with 0:50 to play, which held up to be the final.

Darlington accounted for four touchdowns for Enterprise on the evening, with unofficial stats having him rushing for 60 yards and two TD’s while completing six of 10 for 136 yards and two touchdowns.

Jones unofficially rushed for 48 yards on five carries for CHHS, while Carter gained 17 yards on 11 carries and one TD.  Jones was 12 of 26 passing for 188 yards with two TD’s as well.

The Trojans are at home again next Friday night against Rehobeth in a Class 5A Region 2 contest.

“This is the first region game against Rehobeth, and those region games are what determines the playoffs,” said McCoy. “We’ve got certain standards we are trying to keep and improve upon. There is more riding on next week with it being a region game, but the preparation and energy and intensity have to be the same because it is the next game.”

Crenshaw Christian too much for the Patriots

A second half start of 13 unanswered points was not enough to lift the Pike Liberal Arts Patriots to a... read more