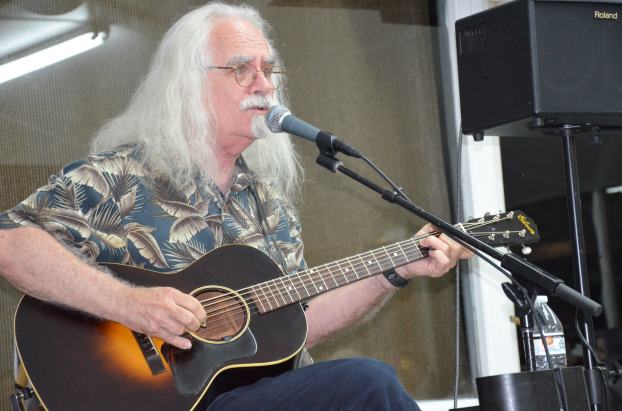 For North Carolina storyteller Michael Reno Harrell, Folkmoot 200 was a homecoming of sorts. The nationally acclaimed storyteller has been featured at five or six “who’s counting” Pike Piddlers Storytelling Festivals. Either by fate, or a gig date, Harrell was placed in Pike County at just the right time to be the featured performer at the Brundidge Historical Society’s Folkmoot 200 Bicentennial event at Lake Simmie Friday night.

The Folkmoot was a gathering of those who have been a part of Alabama’s Official Folk life Play, “Come Home, It’s Suppertime” over 17 years and counting.

“The Folkmoot was a way to say thank you to those who have been the success of our folk life play over the years,” said Lawrence Bowden, BHS president who joins Johnny Steed as the only cast members who have been in all productions of ‘Come Home.’ “Many of those who came to Folkmoot 200, have been in the play 10 or more years and none less than four or so. It was good to see everyone again. Hopefully, before long, we can gather again. The success of the plays is owed to so many and we want to say a personal thank you to them all.”

Randy Ross was in on the ground floor of the folk life play even before there was a ground.

Ross, laughingly, remembered going to the Alabama State Council on the Arts to request funding for a folk life play that would be performed in a burned-out building with a hole for a floor.

“The floor came later,” Ross said. “We went to the State Arts Council with our hats in our hands.

Sara Bowden and I were going to do a short dialogue. I didn’t know how it would go over but Shelia Jackson was going to sing so I knew we had an ace in our pockets.”

The BHS got the seed money for the play.

“Amazingly, the play is still going 17 years later,” Ross said. “There may be different cast members but the original stories are still pulling it all together. ‘Come Home, It’s Suppertime’ never waivers. It is what a folk life play should be.

Ginger Rodgers, also an original cast member, said her years with “Come Home, were among the most wonderful of her life.