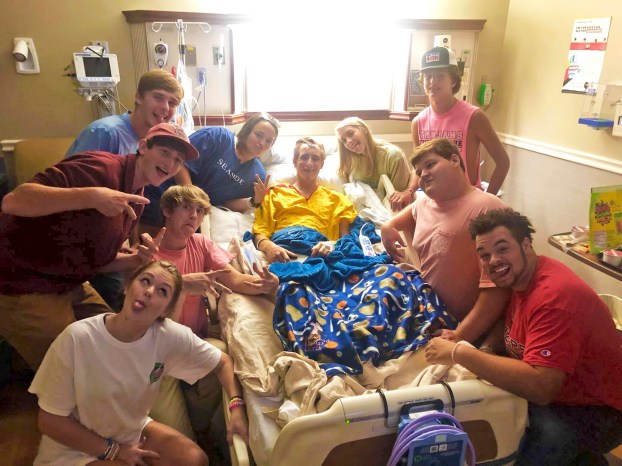 Around 10:30 p.m. Monday night, July 29 a car carrying three friends, who were all rising high school seniors, struck a log truck that had pulled on the Henderson Highway from a logging road. Two of the young men were killed and another was seriously injured.

The driver of the log truck was killed when struck by another vehicle as he was attempting to assist the young men. His son was also struck by the third vehicle and seriously injured.

Three lives were lost and two others were treated in Montgomery hospitals.

On Wednesday, there was some good news to be garnered from the tragedy.

The condition of Terry Reed, who was injured in the deadly highway accident on the Henderson Highway on the night of July 29, has been upgraded. Reed of Troy has been moved from the intensive care unit at Baptist Medical Center South in Montgomery to a regular room, his cousin Frank Wheeler of Brundidge said.

Also, injured in the three-vehicle accident was John Paul Boswell of Goshen who was airlifted to a Montgomery hospital. Wesley Person of Goshen, the driver of the third vehicle involved in the accident, and a passenger in his vehicle were taken to a local hospital for treatment and later released.

Wheeler of Brundidge said Reed sustained injuries to both legs in the accident and, for a time, there was the possibility that both legs would have to be taken off.

“It’s a blessing that Terry will not lose his legs,” Wheel said. “We are thankful for that.”

While Reed is dealing with his physical injuries, he is having to come to grips with the death of his father and friend, Wheeler said.

“Terry hung with his dad a lot of the time,” Wheeler said. “He would help with changing tires and anything that would help his dad out.”

Wheeler said the father and son were very close in that relationship and as friends. Having to deal with the loss of his dad while recovering from his injures is especially difficult for Reed, he said.

“West’s death has been hard on all our family,” Wheeler said. “Especially on his sister, Lou Townsend. They were very close. He went and drank coffee with her every morning. It’s hard on all of us. West was a fine man and he was loved by all of us. We’re all going to miss him. We are praying for Terry, for his recovery and for healing from the loss of his dad.”

Wheeler had three children, a son who is deceased, a daughter and a son, who is an evangelist in Huntsville. His funeral service will be at 2 p.m. Saturday at Bethel Missionary Baptist Church.

John Paul Boswell, a rising senior at Goshen High School, was seriously injured in the accident. He lost two close friends. He is making daily progress, physically. He came home Monday and is now able to walk with a walker.

His mom, Gina Waller of Goshen, said her son went to see an oral surgeon Tuesday.

“John Paul’s maxilla was broken all the way up to his nose and his jawbone on his right side as well,” she said. “He lost his three front teeth on top but, even then, he hasn’t lost his smile.”

John Paul had surgery for a broken sacrum.

“The doctors put plates and screws in the sacrum that went through his hip,” his mom said. “He has about 20 staples in there. He also has staples in his scalp, about 40, but they will be removed next week.”
The young man’s spleen burst and was removed. He has about 40 staples in his abdomen.

Waller said her son’s physical condition is improving and thankfully so. But his heart is broken because Michael Sanders, his best friend since he was five years old, lost his life in the accident.

“I know going back to school without Michael is going to be the toughest thing, tougher than all the physical pain, tougher than anything yet. But I know God has big plans for John Paul. We give God all the credit for saving him.”

Waller said her prayers and those of her family are for all the families affected by the tragedy on the Henderson highway.

“It happened about a mile from our house and so many lives have been forever changed by it,” she said. “Prayer is what will carry us along.”

Rep. Wes Allen, R – Troy, on Tuesday announced more than $1 million in new funding is being made available... read more