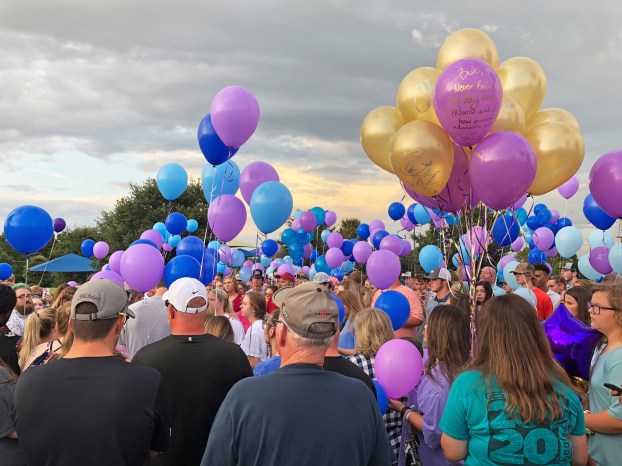 More than 100 people joined together in a verse of Amazing Grace Friday night at the Troy Recreation Department as balloons drifted off into the distance.

The people gathered there were the family, friends, classmates, fellow church members and people touched by the life of Goshen High student Michael Sanders, 17, and Trey Strickland, 18, of Luverne, who were both killed in a wreck near Henderson Monday night.

“Michael gave 110 percent in everything he did,” said Hector Ramirez, a friend of Michael and youth pastor at the Vine Church. “I know that if he could, he’d tell me to tell people about Jesus.”

Ramirez asked the people present to consider salvation and led them in a salvation prayer, “that they might be reunited with Michael in heaven.”

After the prayer, hundreds of purple, gold and blue balloons floated up into an overcast sky as the group sang the opening lines of Amazing Grace before falling into a silent remembrance of Michael and Trey.

Funeral services were held for Sanders earlier in the day.

West Wheeler, 70, of Troy, was also killed in the wreck, and Terry  Reed of Troy and John Paul Boswell of Goshen were also seriously injured.

The three-vehicle crash took place about 10:40 p.m. Monday on County Road 2276, known as the Henderson-Glenwood Road, about 1.5 miles from Henderson.

According to law enforcement, Sanders’ 2008 Nissan Sentra struck the trailer of a 2005 Freightliner hauling logs while it was entering the roadway.

“Moments after the initial crash, Wheeler, the driver of the log truck, exited his vehicle and was struck by a 2007 Mercedes C230 driven by Wesley Lavon Person Jr., 23, of Goshen. Wheeler was pronounced dead at the scene,” said Sgt. Drew Brooks, Alabama Law Enforcement Agency. His son, Reed, was also struck by the Mercedes and transported via air ambulance to a Montgomery hospital.

Back to work: Troy holds first practice of camp

The Troy Trojans took another step closer to the season opener on Friday morning when they began fall camp just... read more