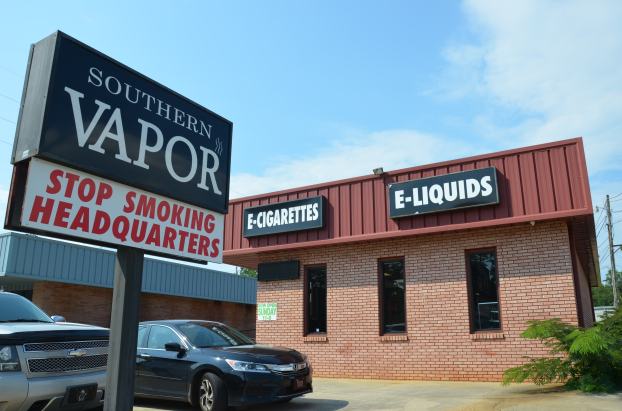 Brett Hudson of Southern Vapor said the regulations won’t affect his business so much as it will affect advertising.

“We’ve already complied with most of these rules, the main difference it is going to make for us is advertising,” Hudson said.

The law also in various ways restricts the in-store and online sale of alternative nicotine products and electronic nicotine delivery systems to minors. A conviction for selling or giving anyone under the age of 19 one of these products would result in a $100 to $300 fine and up to 30 days in jail. The bill also prohibits advertising such products near schools and or opening vape shops within 1,000 feet of a school, childcare facility, church, youth center or public library, playground or park.

The day before the changes took effect, the sign outside Southern Vapor still proudly deemed the shop as the “Stop Smoking Headquarters.”

Hudson said that sign will have to be removed as part of the changes required by the new law.

“We’re not allowed any more to say that vaping can help somebody stop smoking or that it’s a safe alternative to smoking,” Hudson said.

Southern Vapor will be complying with the law without complaint, Hudson said, but he said that change does bother him personally.

Hudson said his father Gary Hudson, his mother and himself all stopped smoking nicotine after switching to vaping, each of them having smoked for more than 20 years.

The shop doesn’t do much advertising of flavors on billboards, Hudson said, so that law should not have a major impact on the business. And although no law had previously banned it, Hudson said his store and many other were not selling vaping products to minors.

Hudson said he does think the regulations were needed to make sure vape stores were kept under some control though.

“It’s something that could have gotten out of control,” Hudson said. “Overall, I think the regulations are a good thing.”

In Alabama, almost 8,000 retailers sell tobacco products. The number of vape shops in the state is unknown since under previous law those businesses were not required to have a tobacco permit.

The Boys and Girls Club is looking for a new facility after the Troy Housing Authority decided to dispose of... read more