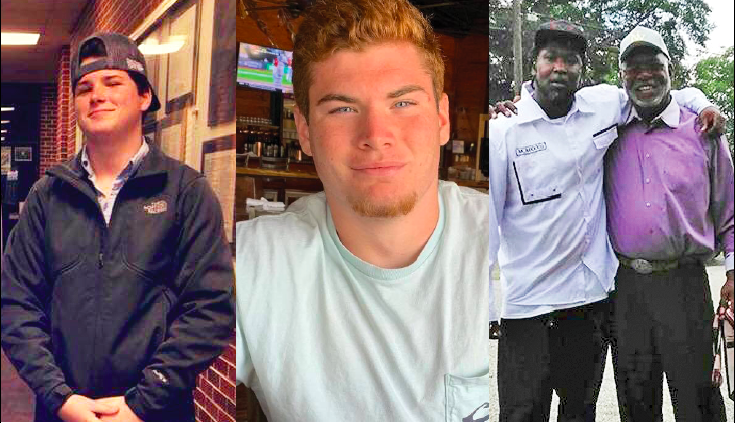 “It’s going to take a long time to heal.”

That’s how Sheriff Russell Thomas described the shock felt throughout a close-knit Pike County community after a tragic accident that claimed the lives of two rising high school seniors and a 70-year-old logger late Monday and left two other people in critical condition.

The three-vehicle crash took place about 10:40 p.m. Monday on County Road 2276, known as the Henderson-Glenwood Road, about 1.5 miles from Henderson. The victims include Michael Sanders, 17, of Goshen; Denny “Trey” Strickland, 18, of Luverne; and West Wheeler, 70, of Josie.

John Paul Boswell, 17, of Goshen and Terry Reed of Troy were both in critical condition on Tuesday, and two other individuals involved the accident were treated at area hospitals.

According to law enforcement, Sanders’ 2008 Nissan Sentra struck the trailer of a 2005 Freightliner hauling logs while it was entering the roadway.

“Moments after the initial crash Wheeler, the driver of the log truck, exited his vehicle and was struck by a 2007 Mercedes C230 driven by Wesley Lavon Person Jr., 23, of Goshen. Wheeler was pronounced dead at the scene,” said Sgt. Drew Brooks, Alabama Law Enforcement Agency. His son, Reed, was also struck by the Mercedes and transported via air ambulance to a Montgomery hospital.

“Of the seven people involved, I know five,” Thomas. “I know the families. It’s extremely hard and is a difficult time for everyone. It’s going to be tough on this community. It’s going to take a while to heal … and some will never heal.”

Thomas visited both Boswell and Reed in the hospital on Tuesday. “They’re both still in ICU and the have a long way to go,” Thomas said. “Both are in critical condition, but they’re going to be OK in time, we think …

“It’s hard because I know both the Wheeler and Boswell families and have known them most of my adult life.” Thomas added that current and former deputies had family connections to the victims.

Sgt. Drew Brooks of the Alabama Law Enforcement Agency said multiple area agencies responded to the scene, including the Pike County and Crenshaw County sheriff’s departments; the Pike County District Attorney; the Pike County Coroner; the Brantley Police Department; Troy Fire and Rescue; the Henderson and Glenwood Volunteer Fire Departments; Haynes Ambulance; and ALEA. “Some of these people have known (some of the victims) all of their lives, and this takes on a different meaning,” Brooks said.

Those close ties echoed sadness through the Goshen and Luverne communities on Tuesday.

Dr. Mark Bazzell, superintendent of Pike County Schools, said this is a very sad time for the Goshen family. “Our thoughts and prayers are with the family of Michael Sanders whose life was lost in this tragic accident and with John Paul Boswell and his family as he recovers from the injuries that he suffered. Our prayers are also with the students, the faculty and staff at Goshen High School, as it is too early to even begin thinking about healing from this horrible accident.”

Bazzell said the loss of any young person is tragic and it will be extremely hard for the seniors at GHS to move forward while dealing the loss of a friend and classmate.

Anna Price, a student at Pike County High School, was among the young people who gathered at Sonic in Troy Monday night and had seen the young men before the accident.

“Mike, John Paul and Trey were there and we all had a good time laughing and talking,” Price said. “They were a lot of fun. Mike had a new car and he was so proud of it. None of us ever thought we wouldn’t see Mike and Trey ever again.”

Anna went to a sleepover and later Monday night, she and her friends heard the devastating news. “We were shocked; we couldn’t believe it,” she said. “I know that everyone who knew them is heartbroken.”

“Mike liked being around people and people liked him,” McDaniels said. “He was a young man with character and he had a great future waiting for him – a promising future. We were proud to have him as an extended member of our family. Anything that I could say about Mike would be good. He was as fine as they come. He will be missed. Everyone who knew him is hurting.”

West Wheeler was the driver of the log truck involved in the accident. He got out of his truck and was attempting to assist the young men in the vehicle when he was hit and killed by an on-coming vehicle. His son, Terry Reed. was also injured in the collision. Both of his legs are broken and he was in critical condition in a Montgomery hospital.

West Wheeler grew up in the Josie area but was living in Dothan.

He had been in the logging business for more than 40 years, said his nephew Frank Wheeler.

“Uncle West was the last of my daddy Ed Wheeler��s brothers. He was my last uncle,” Wheeler said. “He loved the logging business. If you took all the trees he has sawed and laid them back to back, they would stretch to California and back.”

“He believed in hard work,” Wheeler said. “Now, he could get his feathers ruffled. He was a good person, but he had a temper. But in the last 12 years or so, he started going to church faithfully. And, if he got the opportunity, he would get up and have encouraging and inspiring words to say to the congregation.” Wheeler laughingly said sometimes his uncle would talk too long.

“Gator was my favorite uncle. He was a good, hardworking man. He loved to work and he loved his family. And, we all loved him.”

Becky Baggett, headmaster at Crenshaw Christian Academy School in Luverne, said Trey Strickland is going to be missed by all who knew him. His death will certainly leave a void in the senior class, which is a close-knit group, she said.

“A local pastor was on campus today to talk with our seniors to help them try to deal with the loss of one of their classmates,” Baggett said. “Everyone who knew Trey liked him. He was an awesome young man. He had a bright future awaiting him.”

Baggett said Strickland was a talented athlete. He played football and basketball and had hopes of playing football on the college level. “I think Trey would have made it,” she said. “He was talented and he was dedicated.”

Baggett said Strickland came to CCA in the 10th grade and readily understood that the emphasis was placed on academics.

“He fell right into place and was an excellent student,” she said. “He will be missed by so many and in so many ways.”

Baggett said prayers are requested for Trey’s family during this very difficult time and for the entire CCA family as it deals with this tragic loss.

Funeral services for Michael Sanders will be at 11 a.m. Friday at Green Hills Funeral Home. Services for Trey Strickland will be held at the CCA gym, Baggett said, adding that details were not finalized as of Tuesday afternoon. Services are not finalized yet for West Wheeler.