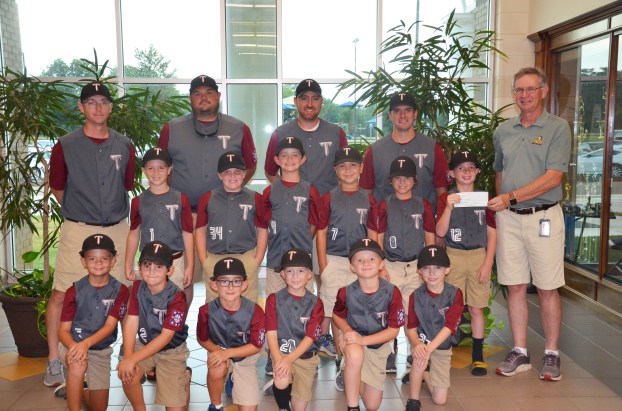 The players of the 8 U Coach Pitch Rookie Baseball team, coached by Keith Jeffcoat, decide to give a donation to the Miracle League here in Troy after their season.

Kenny Green, a father of one of the players, explained that each year the team raises money for the events during the season and for other necessary items like uniforms.

“This year we had a lot of good sponsors and we raised a lot of money. We had a little over $700 left and we decided that the best thing to do was to give it to the Troy Miracle League.”

Believing in what the organization does for the community and knowing that there is a need here in Troy, all the kids on the team decided together that this is what they wanted to do.

“They’ve had lots of get togethers, lots of food, and free stuff throughout the season, and we asked them what they wanted to do with the money,” said Green. “We suggested giving it to the Troy Miracle League, and they were all enthusiastic about the idea.”

Excited about the opportunity to help those in need, Green and the other parents also wanted to teach their kids and help them understand charity and the importance of giving.

“This contribution means the world to us for these players and parents to use the money left over from their baseball season to help others,” said Dan Smith, the director of Troy Parks and Recreation. “It just shows the love we have in the community.”

On the road: Troy Belles travel to Underwood for state tournament