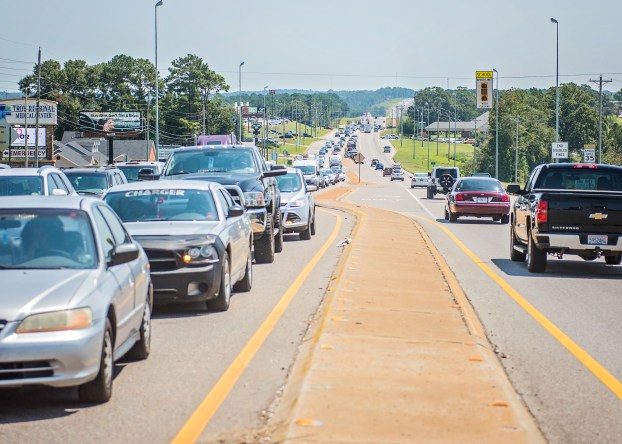 With multiple industries coming to Pike County or expanding, the traffic on U.S. Highway 231 may only get higher.

However, traffic has remained relatively stable on the highway in recent years according to the latest traffic counts from the Alabama Department of Transportation (ALDOT).

Mayor Jason Reeves said part of that is planning to ensure there are alternate ways to get around the city.

“We’re always paying attention to the traffic on the highway,” Reeves said. “It’s something that we are always trying to manage as we continue to grow and develop Troy.”

At a point about midway between the highway’s intersections with Three Notch Street and Elba Highway/South Brundidge Street, the traffic increased in 2017 to an annual average daily traffic (AADT) of 31,610 from a 2016 AADT of 31,110. But both of those counts are significantly down from prior years, with the AADT in 2013 reaching a height of 35,420, while every year from 2008 to 2014 saw an AADT of 32,000 or higher.

The drop coincides with the opening of the Enzor Road connectors Trojan Parkway and John H. Witherington Drive, although the correlation does not necessarily mean a causation.

Reeves said that the connector roads were built though in part to help control highway traffic, so that local residents can get from place to place with less time on the highway.

“That’s certainly one of the main reasons we wanted to create that infrastructure, just giving people more options and ways to get around without having to add to the traffic on the highway,” Reeves said. “Just driving those roads, you can see they’re already getting pretty good traffic.”

As homes and businesses continue to be planned on the new roads, Reeves said that traffic should continue to climb.

Of course the latest numbers are from 2017, and therefore do not reflect traffic in 2018 and 2019, in which time several economic developments have been announced, bringing an influx in jobs and people to the area. Kimber Manufacturing will provide 366 new jobs in Troy, Rex Lumber will be employing more than 110 people and Lockheed Martin is expanding to hire about 100 people as well.

Local governments have also just recruited Hutton Troy Marketplace to locate a major shopping center on U.S. Highway 231 that will be anchored by Hobby Lobby and TJ Maxx.

Reeves said it is important to control traffic on the highway to make the quality of life for Troy’s citizens better, but it is also important to continue having the traffic come through Troy as a major stimulator of the local economy.

“That traffic is vital to our economy,” Reeves said. “Those traffic counts are certainly something that is looked at when industries or retail are deciding whether to come here. The people passing through, whether they’re on their way to the beach or if they’re visiting the university or wherever they’re going, are a big boost to our economy when they stop to eat here, get gas here or shop here.”

The Charles Henderson Trojans took home a championship on Thursday evening when the football team claimed the Wiregrass 7-on-7 championship... read more