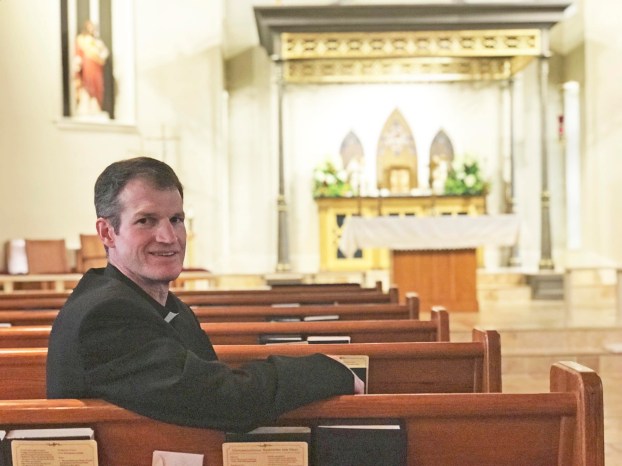 For the last nine years, the Rev. Den Irwin has led St. Martin of Tours Catholic Parish and the Mother Theresa Newman Ministry at Troy University, making lasting relationships with the members there.

Now Irwin says goodbye to his parish and college family as he follows the call to serve as pastor of Our Lady of Guadalupe Church in Wetumpka.

“It’s been a great experience here,” said Irwin, a Montgomery native that served in Mobile and Dothan before settling in Troy for nearly a decade. “It’s a very diverse assignment as a small parish and working with college students. I also am able to go to the prison in Clio once a month. It’s been very enriching; you get to know people over such a long period of time, they touch your life and hopefully as a pastor you touch theirs.”

Irwin’s nine years in Troy have been his longest assignment at any one church, but as a Catholic parish priest, Irwin said his duty is to go where he is called, and now that calling is for him to serve in Wetumpka.

“Not being married and not having children makes it easier for us to be available and able to move, to dive in where you’re at,” Irwin said. “I think most all of us when we’re sent somewhere, that’s our assignment and we do the best we can. There is a sense of letting go. After nine years, you get to know the people and invest in their lives, and they get to know me. I just try to take it for what it is. It’s been a great experience.”

Irwin begins pastoring his new parish Friday, and he is drawing peace from his very first sermon that has been laid out for his congregation.

“We have a cycle of readings as Catholics that are already prepared for us,” Irwin said. “The reading for Sunday is about the Prophet Elijah being told by God to consecrate Elisha as his successor,” Irwin said. “Elisha is out plowing the fields when Elijah calls him, and basically, Elisha burns the farm equipment he’s using, slaughters the animals that were pulling the plow, has a big feast for everybody and leaves and follows Elisha. I’m sort of applying that to myself, that it’s time to move on.”

Even though Irwin will be leaving Troy and no longer pastoring St. Martin of Tours, he leaves a legacy in the formation of the Mother Teresa Newman Center on campus and the renovation of the church.

Irwin gave all credit for the Newman Center to his parishioners and the Troy University students involved.

“(Chancellor Jack Hawkins Jr.) and some of his staff wanted to have something recognizable for students that said ‘Hey, we care about faith,’” Irwin said. “There’s the Newman Center dorms, and in the bottom of one of those we have the Catholic Newman Center. We’re not necessarily intertwined with the dorm, I don’t decide rules of the dorm or who lives there or anything like that. I think it helps that we have a Catholic campus ministry center in one of those dorms. We invite students passing by to watch the super bowl with us or a basketball game or something and engage in some fellowship. Then we can ask them to join us for something more faith-related. It’s been great having that right there in a dorm where people can have fun, watch a  game, eat together – but also pray together, study the Bible and these sorts of things. It makes it really easy to invite people to join us.”

Michael Orlofsky, a St. Martin parishioner and an English professor at Troy University, said Irwin’s campus outreach has been a major part of his legacy.

“I was on the pastoral council at the time (Irwin came to St. Martin) and our archbishop had been trying to find a good fit for our parish,” Orlofsky said. “It’s kind of unique, we have college kids and a bit of a different mix from a typical congregation. (Irwin) came in young and bright-eyed and one of the biggest impacts on our parish was his outreach to college students. Student attendance has really increased under his tenure here. He was also literally on the ground floor of the Newman dorms on the Troy University campus.”

Orlofsky said Irwin was also instrumental in reaching out to Troy’s Hispanic and Vietnamese popualtions, even holding masses at times in Spanish and Vietnamese.

Irwin also ushered the church’s first major renovation since it relocated to Elba Highway, in celebration of the church’s 100th anniversary in Troy.

“Buildings of course are not what church is about, but it does generate some excitement,” Irwin said. “I think people appreciate being in a sacred space like this. I appreciate being able to be a part of that; I was able to allow a lot of people with a lot of talent to do their thing.”

Parishioner Barbara Patterson said, in addition to his many major accomplishments as pastor, Irwin’s handling of the day-to-day duties as a pastor blessed the church and many people in the community.

“There have just been many special moments between weddings, baptisms, funerals – all things done with special care and concern,” Patterson said. “The many, many visits to the sick, elderly and homebound, celebrating holy Mass every day; those are the day-to-day things he did so beautifully and made such a difference for our church and so many people in the community. He took such care and concern and love.”

“If you’re looking for a pastor that really made a commitment to his flock, you couldn’t do better than Rev. Irwin,” Orlofsky said.

Irwin begins his new role in Wetumpka on Friday, with Rev. Chris Boutin coming from St. Joseph parish in Prattville to begin leading the congregation at St. Martin.

Wednesday afternoon, a large gathering of those who have a history with Troy Regional Medical Center celebrated the 50th Anniversary... read more