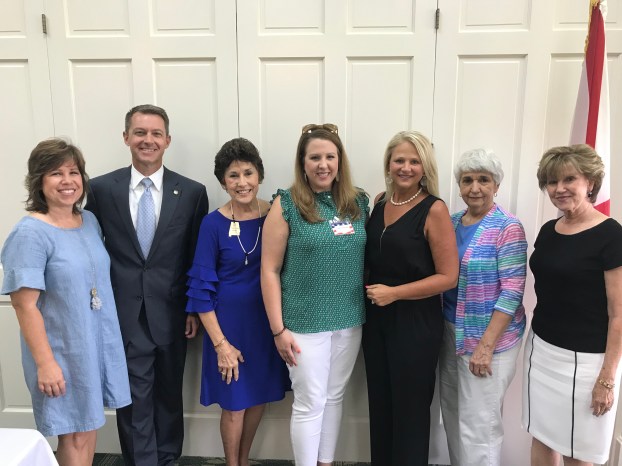 Rep. Wes Allen told members of the Pike County Republican Women Wednesday that “it feels like just yesterday I was elected.”

Of course, Allen has now been serving as the representative for District 89 in the Alabama House of Representatives since November 2018 and just completed his first session in May.

Allen was the featured speaker at the monthly PCRW luncheon Wednesday at the Troy Country Club to reflect on that first session of transitioning into the role and the bills that passed and failed during the term.

“The State House is a little bit different than the courthouse in how they operate,” said Allen, former Pike County probate judge of nine years. “There’s a lot jam-packed into the time period.”

Allen told the group about the state’s good budgets this year, with the largest Education Trust Fund in the state history at $7.1 billion and a general fund budget of $2.1 billion.

The historic education trust fund includes a 4 percent pay raise for educators and brings the starting salary for teachers above $40,000 for the first time in the state’s history. Of that, $4.8 billion is dedicated to K-12 schools and $1.8 billion is directed toward higher education.

Allen said Medicare funding actually decreased by $50 million thanks to decreased costs associated, but remains the primary expenditure in the general fund budget at more than $700 million. Funding was increased for the state’s struggling correctional system in part to follow a federal mandate to hire more corrections officers, and funding of the Alabama Law Enforcement Agency was increased to hire 50 new State Troopers for the highways.

The legislature also took on some major “culture issues,” Allen said, perhaps most prominently a bill that would criminalize nearly all abortions and challenge the Supreme Court precedent allowing abortions at a federal level.

Allen also touched on a variety of other bills he supported that were passed during the session, including a bill establishing oversight of the pardons and parole board and requiring Class A Felons to serve at least 85 percent or 15 years of prison time, a bill requiring the Pledge of Allegiance to be recited in public schools, a bill allowing for Bible courses to be offered as electives in public schools, a constitutional amendment clarifying that only citizens can vote in Alabama elections, a bill requiring colleges to create policies protecting free speech on campus, a bill ending the issuance of marriage licenses and replacing them with contract certificate that can be recorded in probate offices without a probate judge’s signature, a bill seeking to increase rural broadband access, two bills to bolster education about human trafficking, a bill making it illegal to drive in the left lane of an interstate for more than 1.5 miles, a bill allowing for baited hunting of deer and hogs, a bill allowing pharmacies to alert customers about cheaper generic drugs, and others.

Allen also spoke on some bills that he opposed that were kept from passing the legislature, including a bill that would have given authority for the government to remove guns from someone accused of committing domestic violence without a hearing.

“That’s a dangerous slippery slope when it comes to second amendment rights,” Allen said. “We can’t let that bill pass.”

Allen also voted against a bill that would have banned texting and driving, saying it was virtually unenforceable and an overreach of government. He also opposed the backseat seat belt law, which did pass the Legislature, that requires occupants in the back seats of vehicles to buckle up. Allen said he opposed the bill on the same grounds as the distracted driving bill.

Allen also opposed a bill that would have created a committee to make recommendations to lawmakers about medical marijuana laws.

“I felt like that’s a step toward legalizing marijuana,” Allen said. “If you don’t think marijuana is a detriment to society, just go sit through a mental health case in probate court. It’s a bad drug.”

Allen also opposed the bill making kindergarten mandatory for 5-year-olds, arguing that parents know best when their kids should begin school and that research shows not all 5-year-olds are ready to begin kindergarten.

“If I’m having a heart attack, I don’t want you to have to call (my wife) and ask her if it’s OK that I get treatment, I want you to treat me right away,” Allen said. “For someone going through an acute psychotic break, we want to get that person helped and we want to stave off a situation that may get out of control where they may commit a crime.”

Allen also brought up his “red tape reduction” bill that failed to gain traction during the session. It would require agencies creating a rule or regulation that would have an economic impact of $1 million or more on that department to get approval from the legislature.

“When you attack the administrative state, you’re going to get pushback, but we’re hopeful that we can get this bill passed in the next session,” Allen said.

After a year of construction, Kimber is nearly ready to move in to the new portion of the facility and... read more