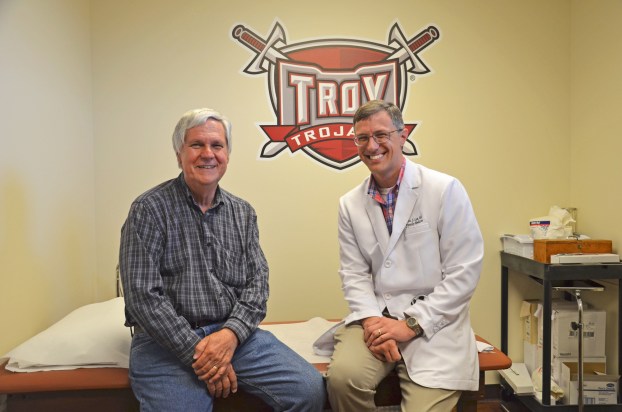 Laws reflect on healthcare through the years

Jimmy Law was only 15 years old when Rosa Lee Boswell, a registered nurse at Edge Hospital in Troy, said to him, “Come with me.”

Young Jimmy was enrolled in the VIE program at Charles Henderson High School and was assigned to Edge Hospital. He was to do what he was told. However, like Prissy in “Gone with the Wind,” he “didn’t know nothin’ about birthin’ no baby.” But, there he stood holding a dishpan of warm water waiting to take the baby from RN Boswell upon the instruction, “Do what I tell you to do!”

Law is not sure what, if anything, that experience had to do with his decision to enter the medical field but he thinks it probably did.

He had accepted a job at a hospital in Dothan but was at Beard’s Hospital with the family of a seriously ill uncle.

“My uncle died and Dr. J.O. ‘Tip’ Colley was attending,” Law said. “He was familiar with me because I had worked at Edge and Beard’s hospitals and he asked me if I wanted a job.”

Law hedged because of the situation with his uncle.

“Dr. Colley said, ‘He’s dead. Troy is your home and this is where you need to be. Be in Dr. Stewart’s office in the morning.’ I was there.”

Law was also there when Edge and Beard hospitals closed and the new, modern Edge Memorial Hospital opened on Highway 231 south in Troy on June 10, 1969.

“We moved patients on everything from ambulances to pickup trucks,” Law said. “Every bed in the hospital was filled and we had patients in the hall. And the hospital stayed full. Back then, there was no limit to the time a patient could stay in the hospital.”

Law laughed remembering a couple who wanted to go on vacation for two weeks but didn’t have anyone to keep elderly parents in their care.

“A doctor, whose name I will not mention, told the couple to bring their kinfolks on out to the hospital, they could stay there,” he said. “The hospital was a booming business.”

Law retired from TRMC as the chief x-ray technician after 31 years. He and his wife, Dale, own and operate Nobel Manor in Troy. He remains connected with health care in that way and also through his son Dr. Eric Law, family medicine physician in Troy.

While Jimmy Law worked his way into the medical field, he said, for his son, medicine was a calling.

“Eric was just a little boy when he climbed onto my lap and said, ‘Daddy, I want to be a doctor.’ He never waivered from that,” Law said. “Today, he is a doctor and, if I say so, very dedicated to his calling and to his patients.”

Eric Law received his medical degree from the University of Alabama School of Medicine in 2008 and has more than 11 years of diverse experience.

Not only did Law have a calling to medicine, he was also called home.

Law said family medicine provides him with an opportunity to practice his trade in a way that is not as common as it once was.

There was a time when doctors made house calls, day and night, and when a doctor treated all members of the family, often times from the babies to the grandparents.

“I wanted a practice where I could get to know my patients,” Law said. “I wanted to see them at community events and in the grocery store. It was important for me to be familiar with my patients, outside of the office.”

While that might seem like a burden, for Law, it’s not. It makes him better prepared to treat his patients.

“Knowing your patients gives a physician insight into what might be causing the anxiety that they are experiencing or the possibly cause of persistent pain,” he said. “I don’t want to see my patients only in my office. That’s why I wanted to come home.”

For Eric Law, M.D. his boyhood desire has been realized. He is home in Troy with wife and kinds, with family and friends. If a patient sees him in the grocery store and happens to mention a nagging pain in the shoulder, well, that’s why Eric Law came home.

News homes to be built off Trojan Parkway

A new subdivision is being developed off Trojan Parkway, the first neighborhood planned for the new road. Walt Stell, representing... read more