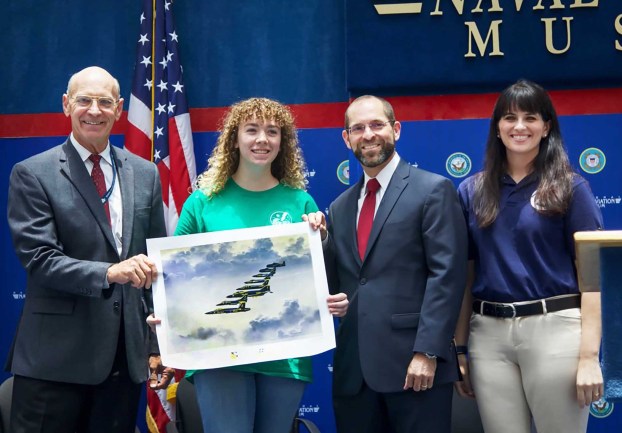 Abigail Brooks, a rising junior at Pike County High School, was named “AXP of the Week” at the National Flight Academy in Pensacola, Florida.

Abigail was selected for the honor from among the 100 campers who participated in the six-day camp that is housed in a multi-story 102,000-square-foot facility surrounded by advanced technology, flight simulators and virtual reality games.

“AXP is the acronym for Ambition Experimental Pilot,” Abigail said and added with a smile that she didn’t actually fly a plane. The National Flight Academy is a virtual reality adventure on the world’s largest simulated aircraft carrier.

Abigail attended the camp for the third time this year and was “the” pilot of the simulated aircraft carrier for the first time.

Abigail was all right with not having to swap into the co-pilot’s role on the simulated aircraft carrier. She had the opportunity to actually fly a plane for a short time earlier this year when she and her sister took advantage of a free plane ride opportunity.

The pilot let Abigail take the controls and actually fly the plane and was surprised how she handled the controls.

“He asked if I had flown a plane before. I told him I had flown the simulated aircraft carrier at the National Flight Academy and that I loved flying,” she said.

Abigail said piloting a simulated aircraft carrier is the next best thing to actually being in the air and at the controls.

“At the academy, there’s a screen that shows your flight pattern and you are given different missions,” she said. “One of our missions was to put out a wildfire and another was a rescue mission from a crashed boat.”

The simulated missions were challenging and Abigail said flying in stressful situations can often result in crashes.

“One pilot took his plane across the water like it was on a jet ski,” she said, and added with a smile that she, too, was no stranger to a crash.

The campers spend much of their time in a high-tech virtual world surrounded with realistic sights, sounds and smells.

Abigail said that as member of the STEM program offered through the Pike County School System, she has been well prepared for the camp each time.

“I like science, technology, engineering and math,” Abigail said. “When I graduate, I would like to go to MIT but I know that’s a little ambitious so I plan to go to Auburn. My goal is to be an aerospace engineer. I would like to go to the moon one day but only to visit; I wouldn’t want to wear a helmet all the time.”

“Only if I could go and come back,” Abigail said with a smile.

TRMC celebrates 50 years of service to the community

Troy Regional Medical Center has proudly served the residents of Troy and Pike and surrounding counties since 1969. In recognition... read more