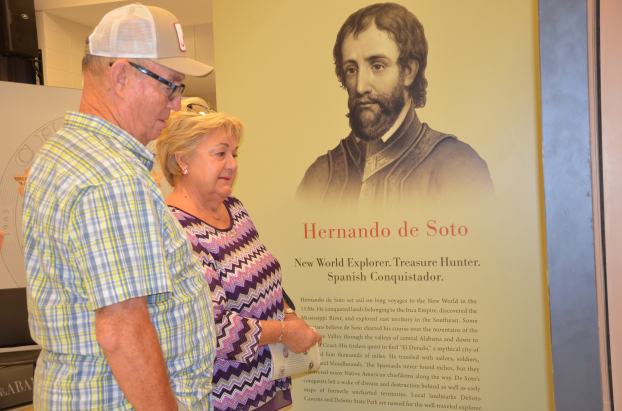 The “Making Alabama: A Bicentennial Traveling Exhibit” opened at the Fine Arts Center at Pike County High School in Brundidge with a private showing for Pike County elected officials on Sunday, June 9. The Alabama 200 exhibit has been open Monday through Friday for two weeks and other days by reservation. “Making Alabama” and will close Friday after a successful two weeks of sharing Alabama story.

The exhibit is hosted by the City of Brundidge with support from the Brundidge Historical Society. Lawrence Bowden, BHS president, said the exhibit has been well received and hopes are that those who have not viewed the exhibit will take the opportunity to do so before it closes on Friday.

Bowden said reservations for unscheduled hours may be made by calling Brundidge City Hall at 334-735-2385. Admission is free.

“The exhibit showcases the decisions and turning points that shaped Alabama history, culture and way of life,” Bowden said. “I thought I knew a lot about Alabama history but I have learned a lot and gained an even greater appreciation for this wonderful state in which I live and for the people who have shaped it.”

Bowden said he now has a better understanding of the milestone events that made Alabama the great state that it is.

“Our history has shaped, and will continue to shape, our future,” he said. “So, we need to know and understand it. I know it’s a cliché but it’s true. If you don’t know where you’ve been, you won’t know where you’re going.  ‘Making Alabama’ let’s us know where we’ve been and directs our path to another 200 years.”

Tuesday morning was busy for the docents as retirees, teachers, retired teachers and members of the business community visited the exhibit.

Allen and Ginger Rodgers viewed some of the touch-screen kiosks together and some individually.

“It’s all so interesting and I like to go back and read some things again,” Ginger said. “Allen moves on and that’s alright. I have enjoyed this exhibit and learned a lot. We both have so we’ll have a lot to talk about.”

Becky Hagen, a retired teacher, said she taught Alabama history and she learned things from the exhibit that she didn’t know about her home state.

“Everybody could have learned from this exhibit,” she said.

Barbara Homann, a transplant from central Wisconsin, said her love of Alabama was reinforced through the exhibit.

She and her husband, the late Homer Homann, fell in love with Alabama years ago and made it their home.

“The people of Alabama are so friendly and welcoming,” she said. “We came here and never wanted to leave.”

Homann said the exhibit was an opportunity for her to learn more about Alabama and the changes that have occurred over the 200 years.

“Alabama has been through some difficult times but there are no better people than the ones we have found here,” she said.

“Making Alabama” will close at 7 p.m. Friday night. However, Bowden said the docents will not run anybody out.

“We want to thank the City of Brundidge for hosting the exhibit, the Pike County Board of Education for allowing us to use the great facility, our docents and all of those who came and celebrated our Bicentennial by learning more about Alabama’s history.”

TRMC celebrates 50 years of service to the community

Troy Regional Medical Center has proudly served the residents of Troy and Pike and surrounding counties since 1969. In recognition... read more