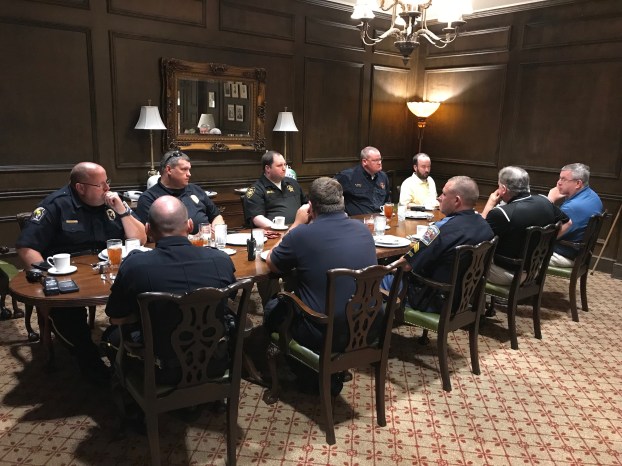 The heads of local law enforcement agencies sat down Tuesday in the first of a planned series of meeting among the departments to communicate about joint needs and ventures.

“We want to make sure everyone is on board and going in the same direction,” Reeves said. Tuesday, the bulk of the conversation centered on the possibility of having all departments on one radio system to streamline the process.

“That way all law enforcement officers and first responders can talk to each other on the radio system without having to switch channels or calling a dispatcher,” Reeves said.

The group also discussed the grant process that could be used to help secure the radios needed to make the system work.

Troy Fire Chief Michael Stephens said bringing the agencies together is a good step toward more communication and interaction.

“We brought the leadership of all the agencies together to talk about the things that could make Pike County better as a whole and allow us to provide a better service,” Stephens said. “This is a great thing. Any time you can get everyone in the same room is a good day in my book.”

Troy Police Chief Randall Barr said the meetings are an insightful opportunity to learn from other responders.

“It creates a pathway to accomplish those needs and do a better and more efficient job of serving the public,” Barr said.

Police have arrested and charged a Troy man with attempted murder following a Sunday shooting that injured two men at... read more