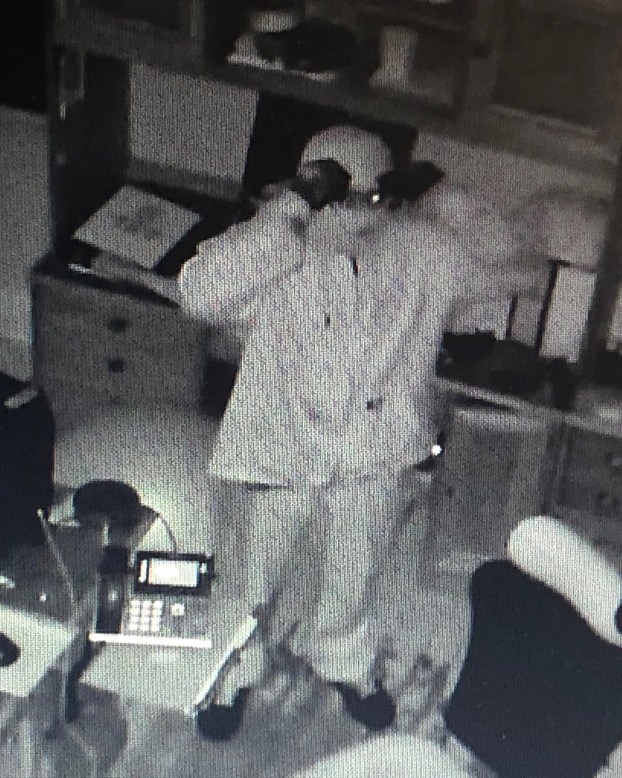 Surveillance video shows the unidentified intruder inside Brundidge City Hall early Friday morning. Officials said the burglar spent nearly an hour inside the building, rummaging through desks and drawers. Police are seeking the public’s help in identifying the burglar.

Between the hours of 1:13 and 2:08 a.m.  Friday, an intruder plundered through the offices of Brundidge City Hall on South Main Street.

Brundidge Police Chief Moses Davenport said the intruder entered the historic city hall building through a broken window on the south side.

“At first, we thought the intruder broke out the window with a chair that was on the porch,” Davenport said. “But while looking at the film from the surveillance camera, we saw that he used a brick. When he left the building almost an hour later, he took the brick out with him.”

Davenport said surveillance camera images of the intruder are being closely studied and will hopefully provide useful information that will lead to an arrest.

“The intruder was about six feet tall and medium build or maybe a little larger,” Davenport said. “He was wearing what looked like some sort of rain jacket and rain pants. It was an infrared camera so his clothing appeared white so we don’t know the color of his clothing but his shoes were black. He had on gloves and his head was covered with a hood or mask of some kind.”

During the time the intruder was in the building, he went into every office, Davenport said.

“He sat at desk chairs and searched through drawers and papers on the desktops using a flashlight,” Davenport said. “He took his time and seemed to be comfortable as he went from one office to the other.”

The surveillance cameras revealed that, for nearly an hour, the intruder opened drawers and sat casually opening envelopes and sorting through papers as if he were looking for something in particular, Davenport said. “He was not your everyday burglar.”

Davenport said the intruder did take money out of several drawers and $35 in bail bond money.  Altogether, he got less than $100.

According to city officials, the alarm system at Brundidge City Hall malfunctioned so the police department was not alerted. It was not until the person who cleans the building arrived at 6 a.m. that the break-in was discovered.

Davenport said the incident remains under investigation by the Brundidge Police Department.

“We have something to go on and are talking to people,” he said. “We encourage anyone that has information that might lead to the arrest and conviction of this intruder to call the Brundidge Police Department at 334-735-2385.

AT HOME ON THE STAGE

For the past eight months, Troy’s Teyonna Johnson has been pursuing her acting dream in California. Johnson, a 2014 graduate... read more