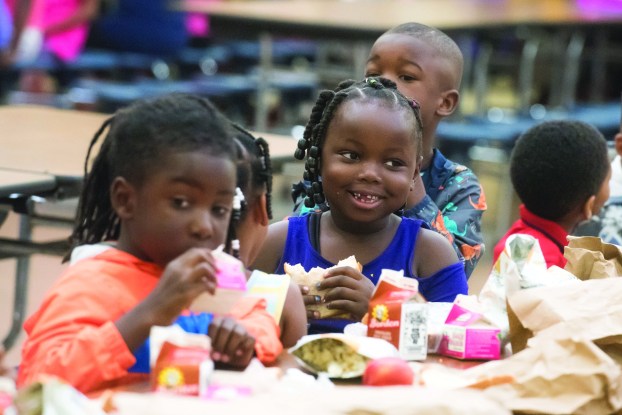 When kids leave school for the summer, they aren’t just leaving behind their friends and their classes – many of them are leaving their most secure chance at a nutritious daily meal.

So the City of Troy has once again partnered with the USDA to implement the Summer Feeding Program at 11 sites around the city for children 18 months through 18 years to receive a nutritious sack lunch.

“You would think the children would have a decent meal since they’re at home, but that’s not always the case,” said Jan Baxter-Lee, director of the program. “Through the Summer Feeding Program, w can assure that they can come to a safe and secure site to get a whole and nutritious meal.”

Baxter-Lee said about 400 to 450 students come to get free lunch each day across the 11 sites. There is no cost for the program, the children can simply show up and receive a free meal consisting of a sandwich, fruit, juice and milk. Baxter-lee said the students are required to eat the sandwich and milk on the premises but may take the fruit and juice with them.

Lauren Cochran, office of civic engagement, said children are at a specific need for the provision of nutritious meals in Pike County.

“According to Alabama Possible, which is the organization where we get our data, the food insecurity rate in Pike County is 21.4 percent and the rate among children is 24.5 percent,” Cochran said. “basically, that could mean anything from not knowing where your next meal is going to come from to not having consistent access to a nutritious meal.”

Pike County Schools switched to providing completely free lunches and breakfast last year and superintendent Dr. Mark Bazzell said the change has shown just how many students are in need of food.

“We serve 16,000 meals each week,” Bazzell said. “With the implementation of the community feeding program, breakfast participation has increased 11 percent county-wide and lunch participation has increased 14 percent. That tells me that some kids were hungry but did not eat because they could not afford it and did not fill out eligibility forms.”

Children and senior adults are the two primary groups serviced in Pike County through feeding programs.

“We cook enough food to feed about 150 people each month,” Kennedy said. “We go around to elders’ apartments and really focus on the elders and the children. We  mostly deliver, we both have vans so we split up to cover more ground. We go and knock on doors at apartments that are mostly older people who are disable and we ask if they’d like a free meal. 99 percent of them say yes and are so happy somebody thought about them.”

The Troy Nutrition Center provides meals for seniors on a regular basis.

“We serve seniors 60 years and older,” said Jessica Cox of the center. “We currently serve about 50 in-house and deliver to 65 home-bound seniors. By serving them, it keeps them as active and independent as they can be. The ones that come in have a good time to fellowship and the ones that we deliver to usually have some reason that they can’t come in, such as being bed-ridden.”

Bush Memorial Baptist Church has served the last 10 years as a distribution point for the Montgomery Area Food Bank for eligible residents.

Bush said the food bank drops off supplies donated by grocery stores and other vendors every 6 to 10 weeks, with different varieties of food each time. The distributions are held on Friday with registration held the prior Monday. Bush said enough food is dropped off to feed approximately 175 families for a week. People interested in picking up food for their family can contact the church office at 334-566-4141 for more information on the distribution schedule and how to apply.

Through the Campus Kitchens program, college students reapportion food that Sodexo, Troy’s dining provider, has leftover from the week to make nutritious meals. Most of those meals are served through the Head Start program while extras are taken to the Troy Nutrition Center. The Backpacks for Kids program distributes backpacks stuffed with snacks and an entrée to children at Head Start and the Boys and Girls Club. Cochran said the food programs are interested in having other stores and businesses in Pike County donating unused food products to bolster the program.

The Salvation Army provides food to people during emergency situations.

“We have a food bank on site and we give out food every day, but we’re emergency-based and not dependency-based,” said Kim May, director of the Pike County Salvation Army. “Whether that’s a vehicle breaking down, a medical issue or whatever would keep people from being able to get food.”

May said the Salvation Army has only non-perishable foods to give and proof of emergency must be provided during the application process.

Bryson Gandy was anxiously watching and waiting to see his name announced as the latest player drafted in Wednesday’s Major... read more