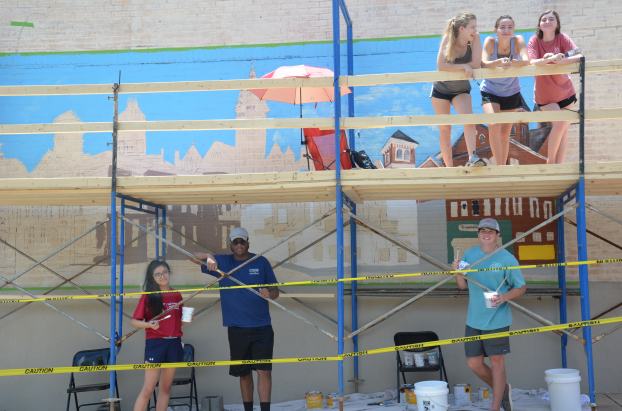 Drivers are slowing their vehicles to a crawl on East Walnut Street in downtown Troy and pedestrians stop and ask, “What’s going on?” Some people are actually going out of their way to, as some might say, “rubber neck.”

What’s “going on” is that a group of young artists and, perhaps, sun worshipers, have embarked on the Reunion Troy Committee’s ambitious Alabama Bicentennial project to paint a mural that will highlight many of the iconic people, places and events of Troy’s storied history dating back to 1843.

The East Walnut Street wall of the Troy Tourism and Public Relations Building, which is directly across from the Johnson Center for the Arts, will be the “canvas” for the mural.

Alex McLendon, a recent graduate of Troy University’s Art Department, designed the mural based on historical research and ideas and suggestions gathered and offered by members of Reunion Troy Committee

The mural will include iconic structures within the city and people who have played important roles throughout Troy’s history.

Work on the mural actually began over the weekend with the placing of the scaffolding and McLendon’s outlining of the cityscape. On Monday, she was joined by several volunteer art students from Charles Henderson High School.

The volunteers are putting on the base coats for the buildings and, as the lead artist for the project, McLendon will add the details as well as the people.

“We’ll have other volunteers as we move along, including some members of the Reunion Troy Committee,” McLendon said. “But most of the artwork will be done by art students from CHHS.”

Retired art CHHS art teacher Pam Smith is lending her knowledge of large scale mural painting to the project and will work closely with McLendon and her volunteers throughout the project.

McLendon has mapped out a schedule of how she would like for the artwork to progress.

“My plan is to be completely done with the mural by June 19,” she said. “The temperature has been around 95. It’s hot out there but, right now, it’s smooth sailing.”