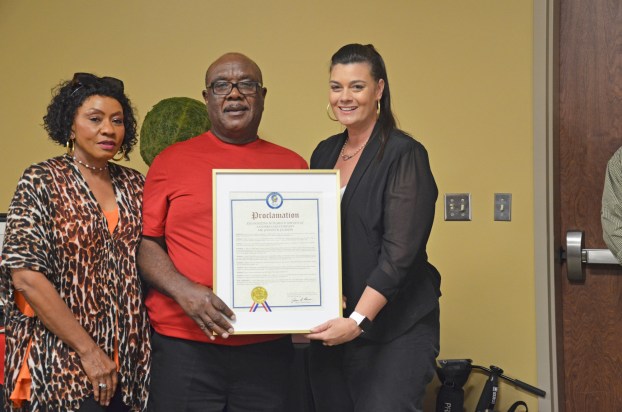 “If you have a job you enjoy; if you have good and nice people all around you and, if you know the boss man will take care of you if you do your job right, why would you want to do anything else?”

That’s how Johnny B. Jackson explained his 50 years and counting of employment at Sanders Lead Company.

Jackson, supervisor of the Scale Department, was honored with a Golden Anniversary reception at Troy Municipal Airport Wednesday afternoon. Family, friends and co-worker/friends congratulated Jackson on his milestone accomplishment.

“Johnny’s been here longer than I have,” Campbell said, laughing. “And, from his first day, January 1, 1969, Johnny’s work ethic has been exemplary.”

Campbell said Jackson has always been willing to do whatever was asked of him, even if it meant suiting up for a game of baseball

Jackson has the distinction of being a member of the Sanders Lead baseball team that defeated the Troy University baseball team. The friendly grudge game pitted Campbell and the owner of a local pool hall, Leonard Casey.

On the day of the game between Wiley’s Braves against Casey’s Pool Hall, the Braves arrived barefooted and with their pants rolled up. Casey arrived with a pickup truck loaded with iced-down beer and almost the entire Troy University baseball team in tow.

A bit stunned, Campbell argued that Casey’s team was to be made up of his customers.

“He told me every one of those university boys was a customer of his,” Campbell said, laughing.

Although Campbell was not a player, he did have an impact on the game, he and the truckload of beer.

“I was the umpire and I called from behind the mound,” Campbell said. “My eyesight was not that good so I might have called a few balls wrong. How I saw the balls and strikes depended on which way my head was leaning.”

Campbell congratulated Jackson on being the first baseman on the only known sandlot team to defeat a Troy University baseball team.

Then, on a serious note, Campbell expressed appreciation to Jackson for his dedication and his willingness to do whatever it takes to get the job done.

“Johnny B,’s positive attitude is an example to all. I thank him for his dedication and commitment for over a half century,” Campbell said as he shook Jackson’s hand. “I look forward to working with you the next 50 years,

In appreciation for his 50 years as a loyal and dedicated employee of Sanders Lead, Jackson was presented a gold Rolex watch.

“I never thought I would have one of these,” Jackson said. “Never.” He expressed sincere appreciation for the gift and for the opportunity to work at Sanders Lead.

“I could not work for any finer people,” Jackson said.” One of the many lessons I have learned from working at Sanders Lead was that no matter what your skin color was, if you were qualified and willing to do the job, you had a job.

“I really have been blessed to have worked under such leadership as the late Mr. Wiley Sanders, Mr. Kenny Campbell, and Bart Sanders. I truly thank God for the opportunity.”

“They are special people,” he said. “And, I’ll never ever forget.”

After 50 years, Jackson remains a dedicated, faithful, and loyal employee of the company in his current position as supervisor of the Scales Department.

Jackson began his career at Sanders Lead in 1969 as a common laborer making $1.75 an hour. After working in that position for a while, the late Wiley C. Sanders, Jr. taught him to drive an 18-wheeler. Jackson made runs to Georgia, Florida, and North Alabama to collect batteries.

Jackson is an active member of St. Mark AME Church where he holds several leadership positions.

Now that school is out for the summer, the “Friends of the Troy Public Library” are as busy as bumblebees... read more