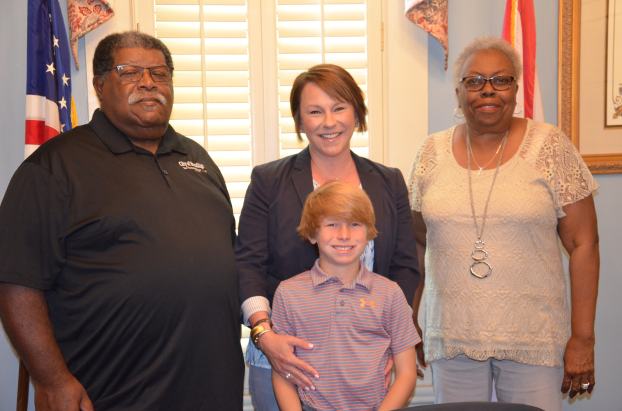 Roby, who was escorted by her young son, George, sat at the table with the mayor as she expressed her hopes of getting Brundidge in the mix, if and when, plans for a long-term veterans’ care center become a reality.

Boyd said Brundidge has everything in place to make the town of 2,000 a prime location for such a facility.

Roby assured the mayor of a level playing for towns and cities vying for a long-term veterans’ care facility to be built in their areas.

The Congresswoman fielded a question from the audience about abortion that continues to be a hotly debated issue. As Roby has long been saying, she is pro-life.

“I will use my time in Congress to defend the unborn,” she said. “I will continue to be voice for the unborn. We can’t quit fighting. Our voice must be heard.”

Roby didn’t talk about the amended Farm Bill but did praise the “catfish” amendment that will protect Alabama catfish farmers.

She said the country’s southern border is a crisis situation and that “the wall” is in most all continuing conversations.

When asked about an increase in minimum wages, Roby said she is not in favor of putting more burdens on business owners.

“We must get government out of the way,” she said. “I am not for more mandates on individual businesses. We must create an environment for economic growth.”

Roby expressed concern about the infrastructure, “that is crumbling all over the state” but with no known infrastructure bill to tackle the issue.

She discussed the frustration over the disaster bill.

“Agriculture is Alabama’s number one industry, we must have a disaster bill in place to get these crops in the ground,” she said.

Boyd expressed appreciation to Roby for taking time to stop in Brundidge.

“It always makes us feel good to know that someone is Washington is interested enough in Brundidge to come and sit down and talk with us,” Boyd said. “To let our voices be heard.”

The council voted unanimously Tuesday to move forward with a project to establish the Hutton Troy Marketplace, a retail center... read more