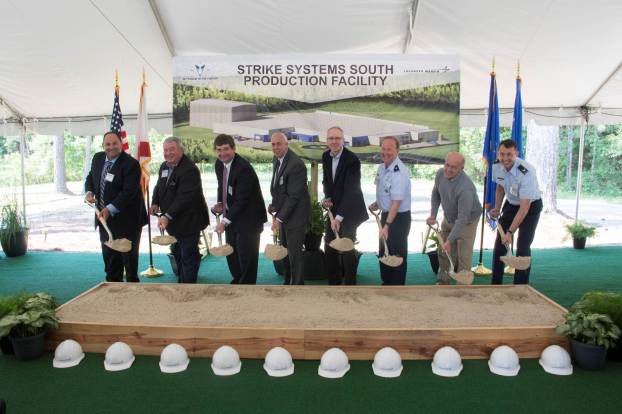 “This is a great day,” said Scott Greene, vice president of tactical and strike missiles at Lockheed. “We’re glad to be a leading employer here in Pike County. Lockheed is here to stay for the long-term. This is not the first groundbreaking we’ve had here and odds are it won’t be the last.”

Building construction is slated for completion in 2021 with Joint Air-to-Surface Standoff Missile Extended Range (JASSM-ER) production ramping up in the second half of 2022.

“This expansion represents Pike County Operations’ long-standing commitment to meet our customer’s current and future needs as well as to bring more well-paying jobs to the area,” said Frank St. John, executive vice president at Lockheed Martin Missiles and Fire Control. “All our employees come to work with an unwavering commitment to help our customers succeed in their mission to create a more secure and prosperous world.”

In abatement requests granted by the Pike County Commission last month, the company projected that the expansion will invest $117.9 million in capital into the economy and create an estimated 97 new jobs within three years.

“It’s really some positive growth for the county there,” Sullivan said. “We do these things for new industries, but we also do it to enhance local business and industry that is already here. It means more jobs and more money in Pike County and these are really high-quality jobs. We’re proud to help out.”

“We are very committed to this facility,” Canfield said. “We invested $2 million in the new training center; we want to be a part of that future here in the state. It’s clear that Lockheed is the kind of business that lives up to its commitments. We entered what I thought was a bold agreement in 2014 to add 224 employees at Lockheed by the end of this year. They’ve already reached that goal.”

Canfield said the company’s success shows the skill of the local workforce.

“It’s an honor to represent the workforce here at the facility,” Canfield said. “We’re very proud. The warfighters that receive these weapons trust you with their lives every day. The history Lockheed has here speaks volumes to the strong relationship we have with Lockheed.”

“Your pride and attention to detail can’t be overstated,” Colbank said. “Some of these sit in a storage container for months or even years, but when they’re needed, they need to work and be accurate, reliable and lethal.”

Mayor Jason Reeves said it is an honor to work alongside Lockheed Martin to continue growth in Pike County.

Lockheed Martin’s Pike County Operations is the recipient of many continuous improvement and performance excellence awards.

“Since we’ve been here, we’ve gone from 30 jobs to more than 500 and we’re still growing,” said Jason Crager, director of Pike County Operations. “Estimates are that in five years, we’ve injected $500 million into the state economy and have indirectly created 1,000 local jobs.”

The Goshen Eagles concluded spring practice with a 10-0 win over Geneva County on Thursday afternoon on day two of... read more