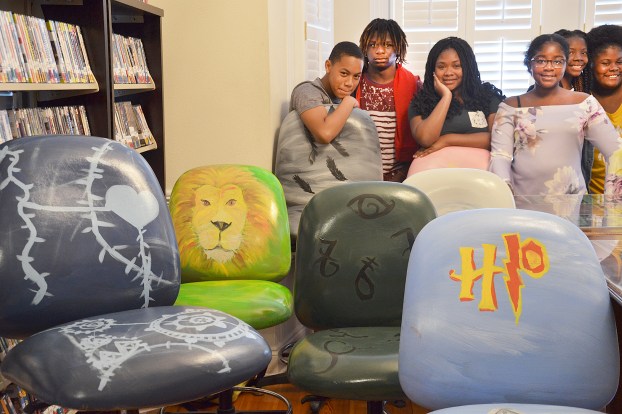 The Pike County High School art students have brushed the last stroke on a Bicentennial art project that has benefited schools in Brundidge and Banks and the library and youth center in downtown Brundidge.

Carrie McLaney, PCHS art teacher, said she applied for a state grant for the PCHS art program and her grant was one of 200 grants approved statewide for projects that honor Alabama’s 200th anniversary

“Each school that was awarded the Bicentennial grants received $2,000 to fund the projects,” McLaney said. “Our art project was to paint murals at Pike County High School and Banks Middle School that would encourage students to do better and be better in all that they do.”

McLaney said she is well pleased with the efforts and enthusiasm displayed by the students who worked on the mural projects.

“The students brainstormed the ideas for the murals and did the artwork,” she said.

The response to the murals at the schools provided the encouragement to do more, McLaney said.

“Delana Flowers, owner and director at the One Stop Youth Center in Brundidge asked McLaney if her students would paint murals on the wall of the downtown youth center. Theresa Trawick, director of the Tupper Lightfoot Memorial Library inquired about a mural project at the library.

“The art students at PCHS have painted murals on all four walks of the One Stop Youth Center and on the front windows,” Flowers said. “The murals inspire and encourage our young people, sometimes without their even realizing it. The words, the colors and images are positive. You just get a good feeling reading the words and looking at the colorful images.”

Flowers said young people are often dealing with issues in their lives that no one knows about.

“The words, ‘Hold on, Pain ends’ could be a message that gives hope to someone,” she said. “We might never know how much the pictures on the walls and the catchy sayings influence the young people who come to the One Stop Youth Center.”

Flowers expressed appreciation to McLaney and her art students for including the One Stop Youth Center in the mural project.

The students also painted a window on the back wall of the city library.

The artwork is colorful and the theme is designed to be uplifting, depending on the viewer, of course, McLaney said.

“At the One Stop Youth Center, we are offering programs that will greatly benefit those who take advantage of the opportunities available to them,” Flowers said. “One special upcoming event is our free Youth Football Camp for ages 5-18 on Friday and Saturday, June 28 and 29 at Ramage Park. The camp will be from 8:30 a.m. until 4 p.m. and lunch will be served.”

Fred Baxter former Brundidge resident and NFL player, will also present an introduction to the game of golf though the 1st Tee Drive program.

Each participant will receive a T-shirt. The number to call for more information or to register is 334-735-5652.

On the gridiron: Eagles close out spring practice