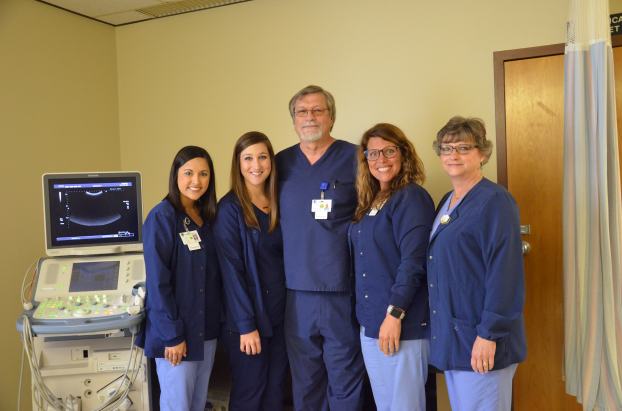 For those who have worked with Arnold over the years, his retirement was bittersweet.

“How lucky I am to have known someone that makes saying goodbye so hard,” said Vanessa Bragg, TRMC ultrasound tech. “Randy will definitely be missed by his TRMC family.”

Bragg said she is blessed to have been able to work with Arnold through the years.

“Randy has taught me so much,” she said. “His knowledge of ultrasound is profound and each and every student and ultrasound tech is honored to have learned from him. His level of expertise has changed the lives of so many patients in Pike County and the surrounding areas. We all hate to say goodbye.”

Thursday morning Arnold sat quietly and contemplated his retirement that would begin in a few short hours.

Walking away from the life that has been so close to his heart for nearly four decades would certainly put a lump in his throat and maybe a few tears might swell in his eyes as he closed the door on a career that he had been so fulfilling.

Arnold is a native of Crestview, Florida. He attended the University of Northwest Florida and earned a degree in marine biology. However, the job market for marine biologists was only a crack in the door. So, Arnold took a different career path. He enrolled in the six-month ultrasound program at the Florida Institute of Ultrasound in Pensacola and never looked back.

“The role of ultrasound technologist was a perfect fit for me,” Arnold said. “I’m not one to sit behind a desk. I enjoy people too much for that.”

An ultrasound tech’s role is that of a technician and also as a comfort bearer.

The ultrasound tech is the first to see what’s going on inside a person’s body, whether it’s a budding baby or a worrisome growth.

“It has been my job to put a patient at ease,” Arnold said. “Most everyone is who comes in for an ultrasound is anxious, some more than others. So, I chit-chat. I ask questions — where they live, about their family, their work. Anything to get their mind off why they are there.”

But, as soon as the ultrasound begins, so do the questions.

“The patients usually say, ‘I know you can’t tell me … but does everything look okay?’” and I’ll remind them that the ultrasound is just one piece of the puzzle that the doctor is trying to put together,” Arnold said. “You’ll have to check with your doctor.”

Arnold is the first to know, the good news and the not-so-good.

“And, you have to learn to mask what you see,” he said. “You can’t let the patient see what you are feeling. It’s my responsibility to do my job in such a way that the patient is put at ease. I have to be positive, even when it’s not easy to do.”

Arnold said every day on the job has been fulfilling in knowing that he has done what is needed to assist with the patients’ treatment plan that will hopefully put on them on the road to recovery.

“Not every day has been easy in that way but I have enjoyed what I do,” he said. “And, there have been sacrifices along the way. Being on call, I’ve missed a lot of things with our daughters and grandchildren. I’ll have the chance now to spend for more time with them and be there for them more. Pamela is going to retire from Troy University in July. We both enjoy traveling and want to do more of that. One day, I’d like to go back to Italy.”

And, Arnold is not tossing out the idea of maybe pulling up roots.

He is from the Florida Panhandle; their daughter Dana House and her family live in Atlanta.

“But, then, our roots run deep here in Pike County,” he said. “Our daughter, Stephanie Wingard and her family, live in Luverne. We’ll just wait and see what retirement will bring our way.”