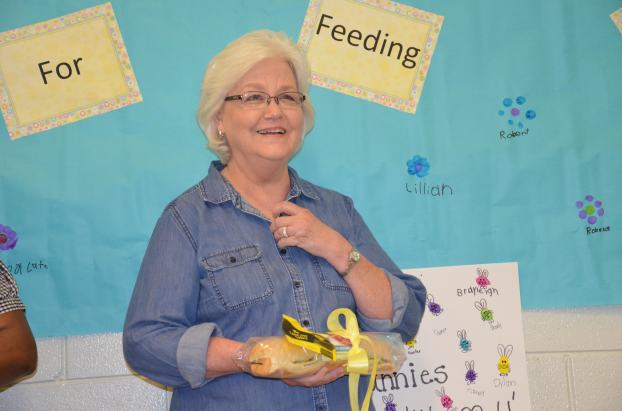 For a few seconds, it seemed as if Cynthia Reynolds had not understood what was said.

Then, surprised washed over her face. Reynolds had just been told she has been named the Kelly Educational Staffing Substitute Teacher of the Year for the State of Alabama.

The students and teachers at Banks Primary School had waited anxiously Wednesday morning for the moment when the recognition would be announced so they could express their excitement and delight that Reynolds has received the statewide award.

The award came as a complete surprise to Reynolds as neither she nor the other two honored Banks Primary substitute teachers even realized there is a Kelly Educational Staffing Substitute Teacher of the Year program.

Karen Smith, a longtime teacher at Banks Primary, said all three of the school’s regular “subs” are outstanding.

“Cynthia Reynolds, Linda Felton and Sarah Kelly are all outstanding substitutes and we wanted to honor them during National Substitute Teacher Appreciation Week,” said Smith who presented each substitute teacher a wrapped and bowed footlong sub as a token of appreciation.

However, the Alabama Substitute of Year Award came from Kelly Educational Staffing.

Adam Lavender, Kelly district manager, said Reynolds exemplifies the best qualities in a substitute teacher. She is dependable, prompt and prepared. The students like and respect her and she loves kids.

“The Kelly Substitute Teacher of the Year is selected from nominations from throughout the state, Kelly representative, Alissa Dusel said.

“The schools nominate a teacher and one is selected from each of the 35 states that Kelly serves,” she said.

Reynolds said she had no experience in the classroom until she decided to sub.

“I worked for an attorney when we lived in Florida but, when we moved to Pike County in 2003, I found myself with an empty nest and was looking for something constructive to fill my time,” Reynolds said “Wyman Botts was on the Pike County School Board and he suggested that I substitute teach.”

Reynolds had raised two children and has three grandchildren. She had taught Sunday school and decided subbing could be worth her time.

“I don’t sub for the money,” she said, but hinted that she would do substitute teaching for half the pay if she had no other choice.

“I just love the children,” she said. “I love the atmosphere and closeness of the small school and most of my subbing is done at Banks Primary. I look forward to subbing because it’s not confining and, if I have something to do or something I want to do, I don’t have to sub.”

For Cynthia Reynolds, substitute teaching is ideal. And, the faculty as Banks Primary School, she is an ideal sub. Together, they make a good team and the kids are the winners.

Brundidge police are investigating the death of a missing person after his body was discovered Wednesday evening. Brundidge Police Chief... read more