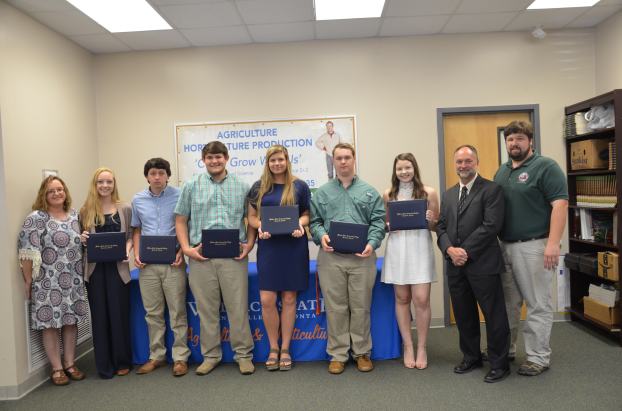 Seven students in the Agriculture Academy at Goshen High School received Ag Ed Certificates from Wallace State Community College of Hanceville in a ceremony at the academy Monday morning.

Jamie Rich, academy instructor, said the seven seniors are the first group from the academy to have earned college Ag Ed Certificates.

Rich and instructor Cody Eiland congratulated the seniors on earning the certification and for paving the way for others to follow.

“We always need those who are dedicated to agriculture education,” he said. “But there is a huge demand in all areas of agriculture because agriculture is important to everything we do. The job market is wide open. Turf and landscaping are big and so is the nursery and greenhouse business. There are a lot of opportunities in agriculture. It’s a growing industry.”

The seven seniors will go their separate ways after they toss their mortarboards high in the air in just a few short days. But, all said their enrollment in the ag academy and what they learned in pursuing Ag Ed certificates will benefit them as they pursue their careers and on into the workplace.

Genelynn had plans to be a veterinarian but “nursing is less expensive.”

“The academy has provided me with a free education and EMT training,” she said. “After I graduate nursing school, I’ll have an opportunity to go on to study veterinary medicine if that’s what I want to do.”

Regan also loves animals and is pursuing a career as a veterinarian.

“I grew up knowing what I wanted to do,” she said. “I work at the Troy Animal Clinic so I’m sure that’s what I want to do but I’ve known forever.”

Alex plans to stay in the field of agriculture in bioprocessing engineering while Damion is heading for the police academy with hopes of working for the city police department and eventually the State Troopers.

Alisa will study poultry science at Auburn and possibly expand her studies to include veterinary medicine. Joe also plans to work within the poultry industry and perhaps own poultry houses.

To a one, the seniors said the Ag Academy and the Ag Ed certificates have been giant stepping stones along their paths to where they want to go.

Premier Chrysler Dodge Jeep Ram was honored as 2019 business of the year Monday at the annual banquet of the... read more