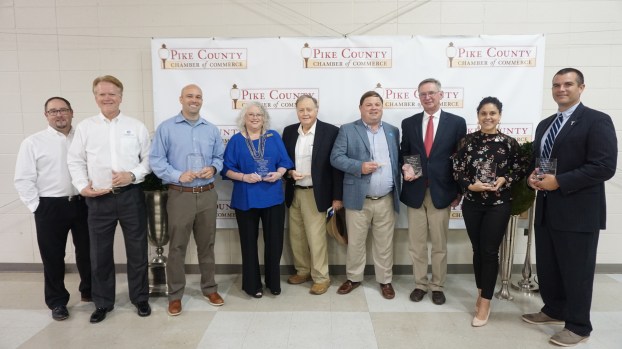 Premier Chrysler Dodge Jeep Ram was honored as 2019 business of the year Monday at the annual banquet of the Pike County Chamber of Commerce.

Business of the year was just one of numerous honors and scholarships that the Chamber awarded Monday at the Pike County Cattlemen’s Complex.

“We are blessed with a very diverse economic climate here in Pike County and it’s important that we recognize these outstanding businesses in each of their areas and what they do for our community as a whole,” said Dana Sanders, Chamber president.

The Chamber invited Katie Boyd Britt, first female president and CEO of the Alabama Business Council, to deliver the keynote speech at the banquet.

“I love the fabric we weave in the wiregrass, Britt said. “We are from different small communities, but we band together when it matters.”

Britt told the story of how she worked in Sen. Richard Shelby’s office for several years in a few different stints and how she eventually was led to serve on the Business Council. She encouraged business leaders to be involved with the organization.

“I get to see how people all across this state present themselves and you all do it so well,” Britt said. “It’s amazing to see.”

The Chamber also made use of the banquet to award its annual P.R.A.I.S.E. scholarships as well as the Betty Wagoner and Hank Jones scholarships to students excelling in the local school systems.

Mark Head, chair of the Chamber education committee, said the scholarships are the Chamber’s way of giving back to the future of the community.

“It’s important for the community to have a good education system going in the various facets that we have,” Head said. “We want to promote that and do what we can as a community to strengthen the educational systems that are here in our community.”

The Hank Jones scholarship goes to a select student involved in the academy system among the schools and the Betty Wagoner scholarship also goes to a s senior selected through an application process.

Through the P.R.A.I.S.E. Scholarships, the student with the top ACT score at each of the local high schools receives $500. The student who scores the highest overall in the county also gets a $1,000 scholarship.

The Troy Recreation Center played host to the Goshen High School All Sports Banquet on Monday evening in Troy. It... read more