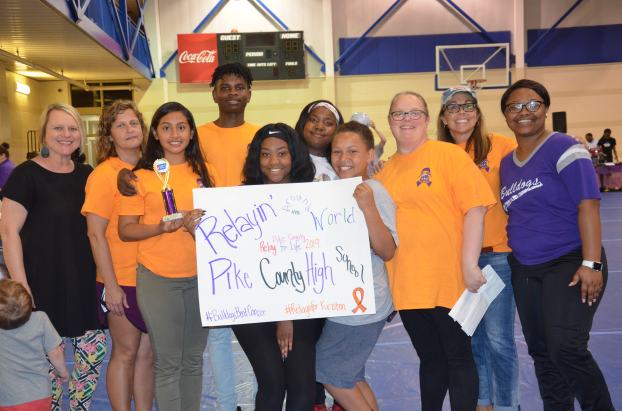 Messenger photo/Jaine Treadwell The PCHS Relay for Life team is awarded for being the “Spirit of Relay” during the 2019 campaign.

The 2019 Pike County Relay for Life fundraising campaign topped off Friday night at the Troy Sportsplex beginning with the Survivors’ Dinner and concluding with the Luminary Walk that celebrates those who have been victorious over cancer, honors those on the battlefield and remembers whose fight is done.

Isaiah Scott, Pike County Relay chairman, said donations from the 13 Relay teams are continuing to come in so the official total of funds Pike County raised for the American Cancer Society will not be available until all donations have been tallied.

However, the top fundraising teams have been acknowledged with CGI of Troy honored as the top Relay fundraising team for 2019. CGI raised $19,000 for the fight against cancer. Southside Baptist Church in Troy and its Relay Queen Pageant, took second place with $15,500 raised and the Brundidge United Methodist Church/Pike County Cattlewomen team was third with $5,538.

Scott congratulated the top fundraisers and expressed appreciation to all teams for their support of Relay and to all who gave in support of the fight agains   st cancer.

Scott said Relay for Life is a countywide effort to defeat cancer.

“Relay includes Troy and all area of Pike County,” he said. “All of us are affected, directly or indirectly, by cancer. So, it is encouraging to have participation from all areas of the county.”

“Back a few years ago, the Pike County Relay was held on the university campus,” Scott said. For various reasons, it was moved to the Tr s oy Sportsplex. However, all funds raised for Relay here in Pike County go in one pool.”

Scott said Relay for Life is the signature fundraiser for the American Cancer Society but it is not a culminating event.

“Fundraising continues throughout the year won’t stop until cancer had been defeated.”

PUSHING ON: Relay for Life held at Recreation Center