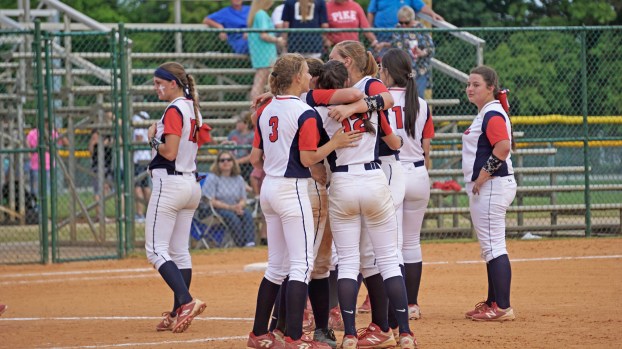 And had not been for a bounce of the ball in the Pike Liberal Arts girls softball team might still be swinging the bats.

However, the Lady Patriots fell 3-2 to Bessemer in an elimination game in the 2019 AISA State Tournament at Lagoon Park in Montgomery Friday morning.

Head Coach Robert Rollan said his team set a goal of getting to the second day of the tournament and “we did that.”

“We set our other goal to play in the championship game and we fell just a little bit short,” Rollan said.  “But that was probably one of the best tournaments we’ve played. We had good defense; we had really good games from our pitchers, we hit well and ran the bases well.”

Friday’s loss came down to “kind of a freak play” in the bottom of the fourth inning with PLAS up 1-0, Rollan said.

“The ball was hit to left field; we caught it and threw it to get a double play at home plate,” Rollan said. “The ball hit the runner in the back of the head, bounced away and Bessemer scored all three of their runs.

“Morgan Bundy hit a home run in the top of the fifth inning to get the Patriots closer but we couldn’t generate any offense after that.”

Rollan said he had great seniors on the2019 team and got great senior leadership from all four of them.

“The seniors are the reason we did so well this year,” he said. “I was thankful I was able to coach them.”

PLAS Headmaster Eric Burkett said he, too, was proud of the Lady Patriots.

“They are great group of girls and they have endured some ups and downs this season, Burkett said. “I’ve gotten to see a lot of their games and it’s obvious that they love each other. I’m proud of the way they played. It was just the one fluke play that kept them for moving on.”

Burkett congratulated the team and coaches on a great season

“I hate to see our seniors graduate. They are great leaders and they will be missed,” he said. “We’ll be looking to another great season from the Lady Patriots next year.

PUSHING ON: Relay for Life held at Recreation Center