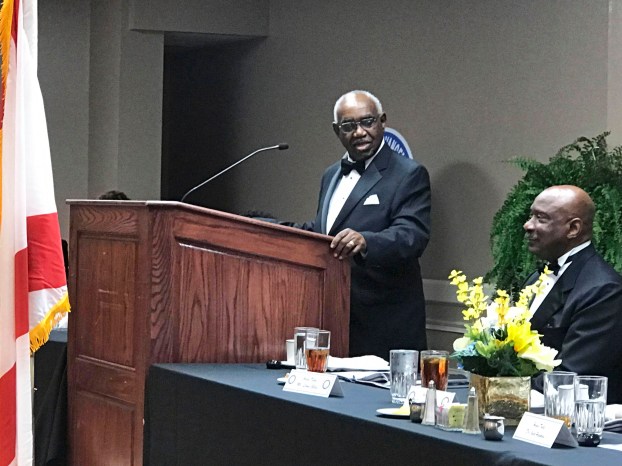 Judge U. W. Clemon urged guests at the annual NAACP Black Tie Banquet Saturday to take a stand during this “dark and depressing time.”

“We stand where we have always stood: on the side of making the American dream of justice and equality a reality instead of just promises,” Clemon told the packed crowd at the Trojan Center ballrooms. “We stand for voter registration and participation, and against voter suppression. We stand for the election of men and women who will speak for us, and prosecutors who will do justice in cases of police brutality and civil rights violations.”

Clemon also talked about growth requiring change, and traced the history of the NAACP and the change it effected.

“I necessarily must consider the outstanding, indelible history of the NAACP,” Clemon said. “Consider how all three branches of the government turned their backs on us and left us to the mercies of our masters … From the ashes of those perilous times, form the dry bones of segregation, there emerged a redeeming spirit, invited into W.E.B. du Bois (founder of the NAACP). From its inception the NAACO has always ben about change. Over its 110 years, the NAACP has attacked and fought and often won some major battles against discrimination in both high and low places.”

Dianna Bascomb, president of the Pike County branch of the NAACP, said that the struggle for rights continues today despite changes.

“We as a people must come together regardless of our color,” Bascomb said. “We must fight the abuse of entrusted power.”

The NAACP chapter also gave out its annual awards Saturday during the banquet.

James became an active member of the Civil Rights movement, boycotting the Montgomery Bus System, surviving the bombing of the Cleveland Avenue Lutheran Church, and led the march of Alabama State students to the capitol to meet the Selma-to-Montgomery marchers. Since then he has also served a mathematics instructor in the Sparta, Georgia school stem, chemistry and physics instructor in Bibb County, and science instructor in Mobile County. He served as chemical laboratory assistant to Dr. Curtis McDonald, during which time their research in spectrophotometry led to the development of the polyester fiber. He currently serves as senior bishop of the Evangelistic Pentecostal Churches Inc., CEO of S.D. James Evangelistic Association, president of Maranatha Bible College and Ministraties Training Institute and much more.

Hattie Flowers was honored as matriarch. Flowers attended Pike County Training School and began work at 13 in 1935, watching children for $1.50 a week. She later farmed, picked cotton, stacked peanuts, upholstery, dry cleaning sewing, cooking and baking. She later worked at the school cafeteria and then Edge Regional Hospital, where she worked for 20 years before retiring. Flowers now attends County Line Missionary Baptist Church where she serves in numerous capacities.

Dan Green was honored as patriarch. Originally from Louisiana, Green earned his Master’s Degree in learning disabilities from Troy University . He moved back to Pike County in 1986, where he worked at Goshen High School for 13 years. While there he formed the organization Young Men of Distinction which allowed young men to participate in activities outside of school. He was instrumental in assisting 30 students getting scholarships. He now serves as a deacon at First Missionary Baptist Church.

Minnie Wilson was honored as the “unsung heroine” for her victory over drugs and alcohol to become a community servant.

At 17, Wilson lost her mother and became a single parent, but she worked at Troy University in food service for 22 years despite her challenges. However, she became dependent on drugs and alcohol and suffered several relapses before finally leaving Alabama to free herself from dependency. Once she returned to Alabama, Wilson began serving in a variety of roles including voter registration, poll watching, volunteering at OCAP, providing transportation services and much more. She also serves as a member of the usher board of Beulah Hill Baptist Church.

Cornelius Griffin was honored for his community service. After returning to his hometown of Brundidge after playing football at the University of Alabama and in the NFL, griffin decided to begin preparing Thanksgiving meals for people in the community that otherwise would not be able to celebrate the holiday feast.

“I wanted to do something to give back to those that have given so much to me,” Griffin said.

Ziad Rollins was given the outstanding business award for Flo’s restaurant.

Four scholarships were awarded to seniors at local high schools.

Camille Hope Cameron of Charles Henderson High School will be pursuing chemistry and health professions degrees at the University of Alabama and plants to be an anesthesiologist. Community service includes participation in Tri-Omega community service organization, church volunteering and more.

Aleyan Daniels of Goshen High School will be pursuing a degree in elementary education at Auburn University at Montgomery. Community service includes participation with rotary club, the Pike County Chamber of Commerce junior ambassadors, Turkeys from Heaven and more.

Kaylee Ferraro of Pike Liberal Arts School plans to attend Troy University in the fall. She participates as member of the Twilighters, editor of the PLAS yearbook and Patriot Press newspaper, over 500 community service hours including with the salvation army, church, Troy Animal Rescue Project, Boys and Girls Club and more.

The 2019 Bible Reading Marathon will begin 7 p.m. Sunday at the Gazebo on the Square in downtown Troy. St.... read more