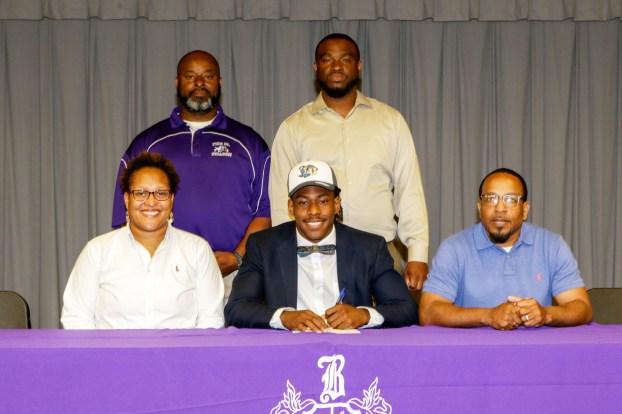 Years ago, Jaidyn Wilson took a brown paper bag, tore it into squares, and on each piece wrote goals: Goals for himself, goals for his younger brothers, and goals for his future. He then taped those brown paper scraps on the doors and walls of his bedroom at his family home in Brundidge to remind him of where he wanted to go, and what he wanted to be.

Vanessa Nickson, Jaidyn’s grandmother, remembers standing in his bedroom years ago, reading the notes, one by one, and could not believe that someone of his age could see where he wanted to be, and set those goals for himself.

“It was just amazing to see that someone that young had all of these goals,” said Mrs. Nickson. “It wasn’t just one goal, it was goals that were step-by-step, for him to get to where he wanted to be in life. Even at that young age, it was amazing.”

Thursday morning in Brundidge at Pike County High before a standing-room-only audience, Jaidyn Wilson achieved one of those goals by signing a scholarship to play football at Lakeland University in Plymouth, Wisconsin.

PCHS Principal Willie Wright said that there have been many signings for many sports at his school, but on this particular morning he could not remember one as moving and powerful as when coaches, administrators, family and friends, one-by-one, took the stage and spoke of the special young man Jaidyn Wilson is, as tears lightly rolled down the senior student-athlete’s face.

“We know nothing in this world is perfect, but the closest we’ve had to being perfect is Jaidyn,” said Mr. Wright. “He’s conducted himself in the classroom and away from school as a young man that represents Pike County High School well in every way.”

Head Coach Fred Holland embodied the persona of the mascot “Bulldog” as a PCHS player in the 1980s, and carries the same intensity today. His players grow from his demanding coaching style, and as a player Wilson is thankful for it.

“Playing for Coach Holland is a tough task, because you are asked to do a lot, and he wants results out of you,” said Wilson. “He is going to push you until he gets those results. If you are going to be down here you are going to work every day. You are not going to slack. If you do, you will have to face the consequences.”

Wilson was a leader on the field for Coach Holland, but off the field as well. Coach Holland is thankful for the example the senior has set.
“Jaidyn made a great impact on our program because of his leadership, and how he represented himself for the school, the team and the community,” said Coach Holland. “Those things speak volumes to our players because so many times there are negative things going on, and he led in the right way. His family values also showed in his work and doing the things we asked him to do year in and year out. I’m extremely proud of him for being able to do those things.”

Jaidyn looked at several schools before deciding on Lakeland, although many miles away, but the one that felt closest to home.

“Even though it is far away, it gave me a home feel,” said Wilson. “The coaches showed that they cared about their players and have a tight relationship. I could relate that to high school with the coaching staff I’ve been with for four years. I feel like I can be productive up there.”

Wilson’s parents, Terra and Anthony Foster, are proud of Jaidyn’s accomplishments, and have already made plans to be at as many of his games as possible.

“I was upset about the distance at first, but I could see the excitement on my child’s face every time he talked to the coaches,” said Mrs. Foster. “I prayed about it, and I went ahead and signed up for the Sky Miles when we went for our visit. We’re already booked for the first two games and ready to go.

“Watching him grow up, I knew this day would always come. I’m just super proud of Jaidyn, and him always putting God first and working extremely hard as an athlete and as a student in the classroom. We have six boys, and the other five look up to Jaidyn in all that he does.”

“We tried to bring him up the same way we were brought up, by instilling morals and family values,” said Mr. Foster. “Our rules at home are ‘God first, family second, then everything else.’ If he lines it up and continues to remember that, he will always come out successful. He’s a good kid overall.”