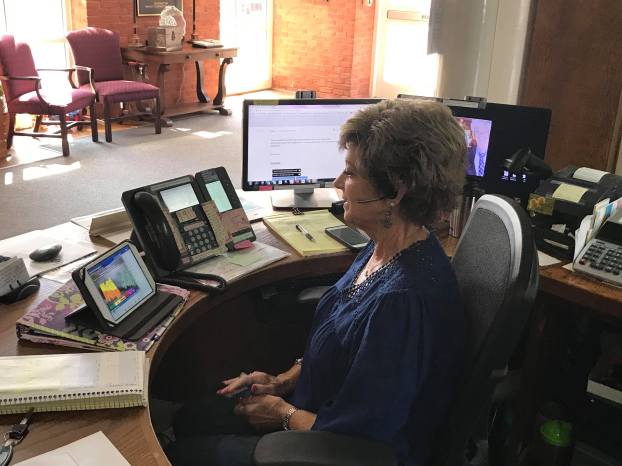 Bennie Jinright, 311 operator with the City of Troy, monitors the weather Thursday as severe storms threaten to hit the area tonight.

As more storms threaten Pike County once again tonight, officials are preparing to deal with the possible aftermath.

“We want people to be able to get out of the weather if they live in a mobile home or something like that,” Reeves said. “The recreation center will open at 7 p.m. Residents should bring toiletries, pillows and a blanket. Students can come to the Trojan Center. We’re trying to keep those college students on campus if possible instead of going to the community shelter.”

Just four days after an EF1 tornado carved it’s way from Hunter’s Mountain Mobile Estates to Three Notch Street in the area of Downtown Troy, a similar storm system is threatening the county once again.

Reeves said the county is still at an enhanced risk of severe storms capable of producing tornadoes, hail and wins of more than 60 mph.

Bennie Jinright, 311 operator for the City of Troy, said she and other city officials will be back to man the 311 line at City Hall for calls about utility outages and other city needs. All emergencies should be directed to 911.

Reeves, also the dean of student services at Troy University, said it is still too early to consider whether the weather will impact Troy classes. Local schools including all Troy City Schools, Pike County Schools, Pike Liberal Arts School, Covenant Christian School and New Life Christian Academy were already scheduled to be out Friday for Good Friday. Preschool at New Life is planned to have school Friday.

Troy Utilities Manager Brian Chandler said crews will be ready to go tonight if the city suffers power outages again due to the storms.

“Today is actually national lineman day, so we have actually spent the morning doing training and having discussions and meetings and all that kind of stuff,” Chandler said. “This afternoon we’re going to do some more training and then tonight we’ll have crews here ready to go to work if things get bad as soon as the sever weather has passed.”

The Messenger will be continuing to monitor this storm online and on social media as the severe weather approaches. Stay tuned for more updates.

Patriots host Lee-Scott in opening round of playoffs

The Pike Liberal Arts Lady Patriots enter the postseason on a high note after sweeping a doubleheader on Tuesday night.... read more