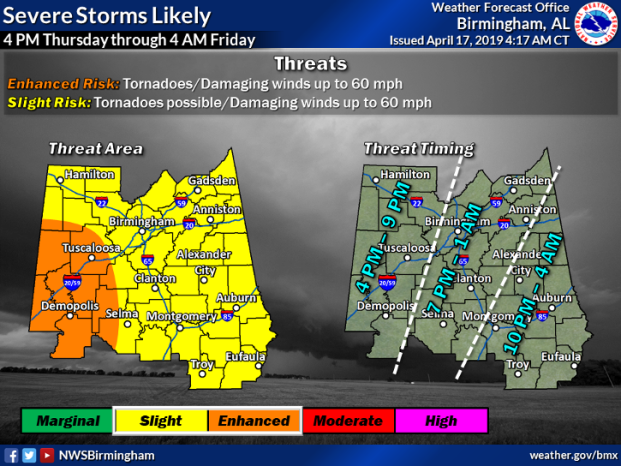 According to the NWS report, the EF1 tornado first touched down in the area of Hunter’s Mountain Parkway with winds up to 95 mph and a diameter of approximately 300 yards.

It continued on its path northeast crossing U.S. Highway 231, damaging power poles and businesses in the area. It continued on into the downtown area damaging homes on College and Murphree Street before crossing U.S. Highway 29/Three Notch Street and damaging more buildings, including tearing the roof from the OCAP building. The tornado lifted just before reaching Gibbs Street and Troy Elementary School, the report states.

Two other EF0 tornadoes were also reported by the NWS, both in the Goshen area.

One EF0 tornado touched down in Crenshaw County and moved into Goshen, where it damaged MeMe’s Convenience Store before lifting. The tornado stayed on the ground for 1.09 miles and with maximum path width of about 50 yards and peak winds of 70 mph.

The other EF) tornado touched down in the Goshen area over rural farmland and fields and tracked for about a mile with a  path width of 150 yards before lifting off the ground wth peak winds of 70 mph.

The Troy tornado shifted about a dozen mobile homes off their foundations at Hunter’s Mountain Mobile Estates and rolled several of the homes.

Judy Golden, owner of Hunter’s Mountain Mobile Estates, said the residents of the estates have been fortunate throughout the situation.

“The people living in the units affected have all been placed in other mobile homes; that process went really seamlessly,” Golden said. “We actually have supplies here that nobody has even taken … It’s incredible how smooth everything is going. The support that the community has showed is fantastic. Local restaurants, the Vine Church, Red Cross, Salvation Army – so many people have done so much … We’re so blessed to be in such a supportive community, seriously. It’s stranger; it seems so devastating but everybody is gong about their business like it’s a normal day. We were prepared for a lot of issues and to do whatever we needed to do, but very few people have even been coming to the office.”

Neighbors and city crews also quickly responded in other areas that suffered damage, quickly clearing debris and checking on each other.

As the city recovers from the tornado strike, residents need to be bracing for the potential of more severe weather on Thursday.

Pike County is among counties at a slight risk for severe storms Thursday that could once again be capable of producing a tornado.

“The threats include tornadoes, damaging winds and hail,” Martin said. “Strong southerly winds will be bringing in some unstable air with a good amount of wind shear as well that is needed to produce rotation in those storms, so there is certainly potential for severe threats. People don’t need to get too caught up in whether it’s a ‘slight risk’ or ‘enhanced risk’ – everyone needs to be prepared and keep an eye on what’s going on.”