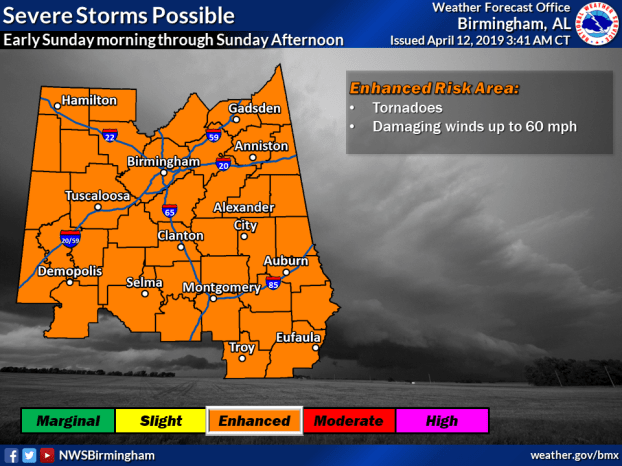 Pike County is included in an enhanced risk for severe thunderstorms Sunday that could lead to tornadoes and damaging winds more than 60 miles per hour.

EMA Director Herb Reeves said weather officials are monitoring the front and should have more information early Saturday about the storm’s movements.

“The risk has gone from slight to enhanced since yesterday,” Reeves said. “Talking with the state, we’re holding off a little bit until tomorrow to make decisions about opening the emergency operations centers.”

Severe storms can develop quickly, and it isn’t always clear where a tornado will form, so Reeves said all residents ned to prepare for the scenario that a tornado forms in Pike County.

“We’re trying to figure out exactly where it’s going to go,” Reeves said. “We encourage people to pay attention to the weather, especially Saturday night into Sunday morning, and have some means of notification whether Smart 911 or a weather radio, especially if you live in a remote location away from any sirens. You can even have your neighbors call you if the weather turns bad, whatever you need to do to stay notified.”

The severe storms are expected to impact Alabama between 2 a.m. and 2 p.m. Sunday, with more specific timing becoming clearer as the front approaches.

“We should have several hours of notice before the storms get in our area,” Reeves said. “But in a matter of minutes it can turn deadly. We want people to be alert and be prepared for any situation.”

The Messenger will be monitoring the storm and updating social media as new information is released.

All roads may not lead to Henderson, Alabama on the second weekend in April but County Road 2290 is a... read more