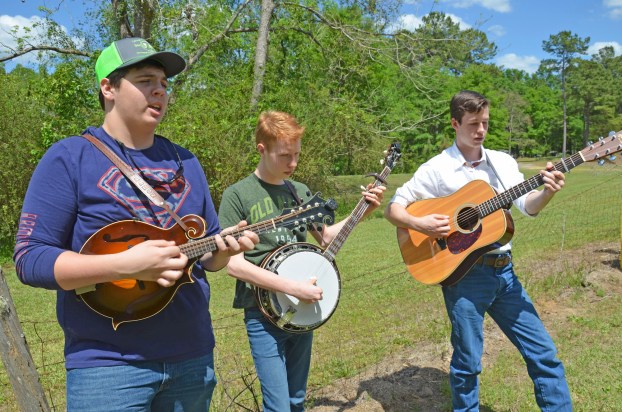 All roads may not lead to Henderson, Alabama on the second weekend in April but County Road 2290 is a direct path to  Ol’ Rex’s Bluegrass Festival which has been going on “nigh about” 60 years.

Bluegrass has been played in the small rural community of Henderson for so long that even the wind has that high lonesome sound.

Rex Locklar started the bluegrass festival nearly 55 years ago as a way of carrying on the American roots music tradition.

Locklar’s death in February 2014 could have brought an end the Henderson bluegrass festival. However, three men, Pete Austin, Shelby Cargisle and Bobby Jackson, with the support of Wiley Locklar, would not let that happen.

They took down the aging Henderson schoolhouse and replaced it with a small “store” and a pole barn and the music plays on.

The Henderson Bluegrass Festival will get underway tonight around 6 p.m. and will continue until the wee hours on Sunday. Admission to the festival is free for pickers and grinners but donations for the upkeep of the park are greatly appreciated.

At 1 p.m. Saturday, there will be a gathering of bluegrass faithfuls at the barn to remember those among them who are no longer here.  They will remember Ol’ Rex for the fifth time and Pete Austin for the first.

“Pete’s death hit us all hard,” said Dale Fowler. “He is one of those who kept this bluegrass festival going. His is already missed. It’s going to be up to Shelby and Bobby  now.”

And Cargisle said bluegrass music will continue to be played, sung and revered in Henderson.

“It’s tradition,” he said. “There’s still a lot of interest and among young folks, too. Of course, if we keep having stormy weather in October, we might have to just settle for the one festival in April.”

In the distance, bluegrass music was being played throughout the park Thursday. Three young pickers were playing under a canopy and a group of more seasoned players formed a pickers’ circle and played and sang. There was no doubt it was the distinctive sound of bluegrass.

But it’s not just “their” music. It is becoming the music of yet another generation.

Teenagers Justin Koch and his brother, Aaron, are members of that younger generation, as is their friend, Zach Holt.

The brothers are from Pensacola and Zach is from Andalusia. They met at the Gulf Coast Bluegrass Festival. Bluegrass has a way of bringing people together.

“We look forward to getting together to play and sing,”  Zach said. “I play the mandolin; Justin plays guitar and Arron plays banjo but we all play more than one instrument.”

Justin said the first time he heard bluegrass to really know what it was, he was hooked.

“It’s a sound that’s different from any other,” he said.  “And, there so much more to it than playing and singing. There are stories and memories. Like, if you are playing and it starts to rain and you get stuck under a pavilion, you meet people and just have good time, listening to the talk and hearing the stories.”

Zach agreed that  socialization is a great part of what binds bluegrass pickers together.

“You make music and it sounds good,” he said. “Bluegrass is different from any other kind of music. We get together and play together. Other music’s not like that. Not even country.”

The young pickers said bluegrass music is changing to a degree and that’s good.

“Depending on the region, though,” Justin said. “In some places, bluegrass is less traditional; it’s more progressive.  And, too, depending on whether it’s played at a bluegrass festival or a folk festival where you’ll hear more … Johnny Cash.”

The pickers said bluegrass is here to stay. It will change some but it will always have that high lonesome sound that “gets in your head and won’t go away.”

Excitement was in the air on the campus of Pike Liberal Arts on Thursday night when the Patriots celebrated senior... read more