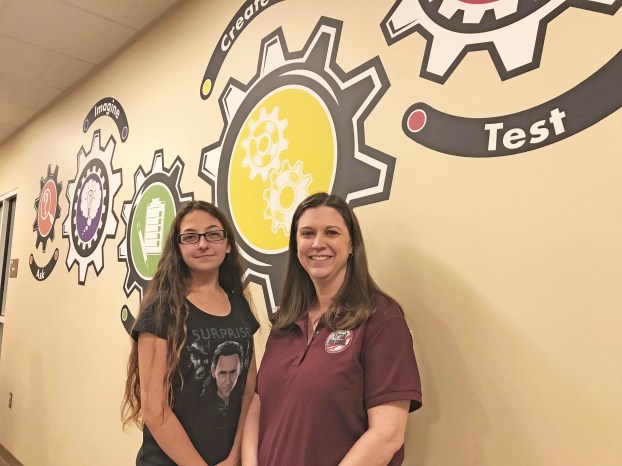 Two students and a teacher in the local school systems will be headed to Space Camp in Huntsville free of charge this summer after receiving scholarships.

Gabrielle Leveque and Amy Garrett of the Pike County Schools system were both selected to attend the U.S. Space and Rocket Center through programs created by the Alabama Legislature.

Leveque, an eighth grade student at Banks Middle School, was one of two Pike County recipients to receive the SALSA (Space Academy for Leading Students in Alabama).

“I was shocked when I found out I was selected,” Leveque said. “Especially since only two students were selected from our district.”

The application was open to all Alabama students ages 12 through 14 to attend the camp, which promotes science, technology, engineering and mathematics education along with leadership skills.

Leveque said she had to answer questions such as “Would you want to be one of the first people to go to Mars?” and “What technology would you build if you could make anything?”

Leveque said she is interested in space and engineering, but she doesn’t want to go to Mars because it would likely be a one-way trip.

She was more excited about what kind of tech she would build.

“I want to build an AI robot that can think for itself,” Leveque said. “I want it to be adaptable to other people’s personalities. There would be an off switch, of course, to prevent the robots from going evil; I don’t want to start the uprising.”

While Leveque doesn’t necessarily want to be an astronaut, she said she definitely wants to do something within the STEM field.

“I don’t know about being an astronaut, but I really do want to go into the STEM field, probably in robotic engineering,” Leveque said. “I think this trip can open my eyes to new careers.”

STEM teacher Amy Garrett said the scholarship is a great opportunity for students.

“It’s a fantastic opportunity for students,” Garrett said. “Any student between the ages of 12 and 14 should consider application; it could open their eyes to opportunities they may be interested in in the future that they may not even know exist.”

Garrett herself was selected for a scholarship to space camp, although this one will be aimed at educators instead of middle school students.

“Last summer my daughter and son, the three of us went and had a wonderful time,” Garrett said. “I’m looking forward to a more in-depth study so I can give that back to my students.”

Pike Liberal Arts Student Kirkland Bradford was also selected for a scholarship and will be attending the camp with Leveque in May.

Rep. Wes Allen, R-Pike, said he is glad that the Legislature could help provide this opportunity to local students.

“With Vice President Mike Pence’s announcement in Huntsville that Alabama will be the training ground for astronauts who will make the next moon landing, I am proud that these two students will attend space camp and take advantage of this tremendous opportunity,” Allen said. “I know they will do well and make Pike County proud.”

Saving Our Youth prayer breakfast is Saturday in Goshen

The Saving Our Youth Organization will host a Community Prayer Breakfast from 9 until 11 a.m. Saturday at 5971 Highway... read more