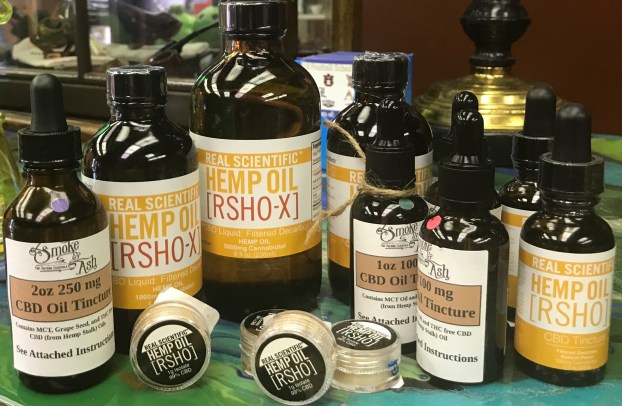 Troy resident Shelby Senn was driving in heavy traffic when she realized a change in her system.

Usually, she would be anxious with so many cars around her travelling at this speed, on the verge of a panic attack. But this day, she felt OK, something she attributes to taking CBD oil.

“When I first took it I was thinking ‘What I’m a supposed to be looking for? Will I be sleepy or drowsy?’” Senn said. “But I didn’t really notice anything. Then after about a week of taking it I was driving in traffic and I just noticed that I wasn’t anxious like I normally would be.”

Senn first tried the CBD oil, short for cannabidiol, in January after her mother found success with it.

“She has (multiple sclerosis) and was taking a lot of medicine; now she’s using CBD oil and she no longer has to take anything else,” Senn said.

Senn began using the oil shortly after it was made legal in the U.S. when Congress passed the Farm Bill on December 12, 2018.

Cannabidiol is one of the major active ingredients of the cannabis plant and is derived from hemp, which is within the cannabis family but differs from marijuana.

According to a 2017 report from the World Health Organization, “In humans, CBD exhibits no effects indicative of any abuse or dependence potential…. To date, there is no evidence of public health related problems associated with the use of pure CBD.”

The other three-letter word THC (Tetrahydrocannibinol) is one of the other primary ingredients of marijuana and is the part that has psychoactive properties – the part that gives people a euphoric high.

While it is abundant in marijuana, that is not the case in hemp.

In November 2018, Alabama Attorney General Steve Marshall put out a joint notice with the Alabama Law Enforcement Agency, the Office of Prosecution Services and the Department of Forensic Sciences detailing the state’s laws at the time due to “questions surrounding the legality of cannabidiol.”

When the Farm Bill was approved by Congress, the notice was updated to reflect the change in federal law.

“As a result of this Congressional action, CBD derived from industrial hemp, with a THC concentration of not more than .3 percent on a dry weight basis, can be legally produced, sold, and possessed in the State of Alabama,” the notice states.

Officials in the attorney general’s office confirmed that it is legal for CBD oil to be sold to the public in retail stores as long as it meets that criteria. If the CBD oil has a THC concentration greater than .3 percent or if it is derived from marijuana, it is still not legal to be produced, sold or possessed in Alabama for the general public.

Angela Farmer, owner of Smoke and Ash in Downtown Troy, said the store now sells CBD oil and that it is very popular among customers.

The CBD oil has zero THC, Farmer said, and it is triple lab-tested to make sure that there is no THC present.

“I think that there are enough people who say they’ve gotten health benefits from CBD that it would be a shame to have access to it but not make it available for purchase,” Farmer said.

For Senn, she said her lab work “came back normal” after taking the oil (she said it wasn’t normal before taking it) and that she also has had exemplary blood pressure since she began using it. She said she is hoping that it will allow her to quit blood pressure medications soon.

While the Farm Bill allowed for the legality of hemp-based CBD oil, marijuana-derived oil is still illegal in the state. Hemp-derived CBD oil is also illegal if it contains a THC concentration greater than .3 percent THC­.

The new federal law will not prevent states from adopting laws to restrict or regulate the production of industrial hemp, and prescription drugs and other consumables containing CBD will be regulated by the U.S. Food and Drug Administration.